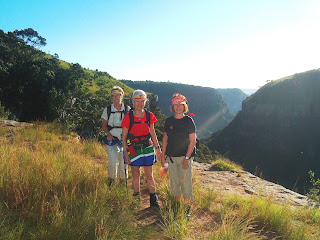 We did a walk through the Two Gorges today. One is the Kloof Falls gorge and the other is the Everton conservancy gorge. What a beautiful day to walk.
We had a full dress rehearsal with boots and spats, shorts, shirts, waist-bags, backpacks etc.
It started off coolish but the sun was shining, blue skies and spectacular scenery. The entire Kloof Gorge system lies within the Kranskloof Nature Reserve and falls under the juristriction of KZN Wildlife. We had a pit-stop at the picnic site and then continued up Kloof Falls road to the View site. Magnificent in the early morning with swallows still swooping above and the waterfall 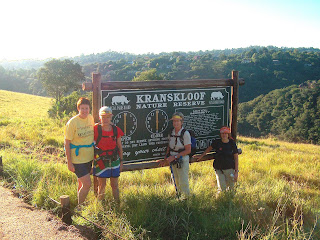 noisy and full after recent rains.
Glynis (who walked the Coast to Coast with us in 2001) and Linda walked with us too, but they didn't have backpacks.
The road up from the gorge is very steep and by the time we reached Waterfall after 2 hours walking we needed a coffee break. We stopped at the Waterfall centre and had a good stop there before carrying on along parallel to Inanda Road, turning left at La Domaine into Acutt Drive and the Everton Gorge.
Val, Marion and I decided to change from boots to sandals (might as well get used to walking in both) and walked the rest of the way back to 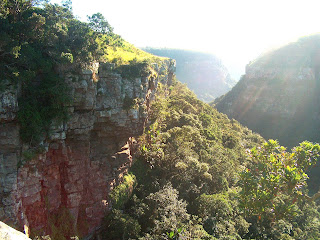 Kloof in our sandals. I'm not so sure about the sandals anymore. They have a very high instep and after a while my left foot started feeling the pressure. I might have to have a rethink on taking them on this walk.
A good 22.5km trek this morning; backpack feels good; boots were comfortable and no hotspots or chaffing anywhere.
We had a lovely lunch at Sam Brown's in Kloof before going home. 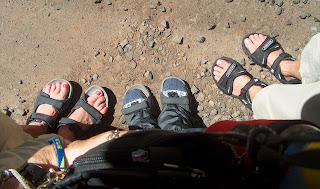 Some beautiful scenery for you ladies to walk in! You sound really raedy for the BIG TRIP.

We have major snow accumulations back in the forecast for later this week...sigh...I am soooo ready for warm weather. But Dog and I made some good practice walks over the weekend.

In four weeks I will be in Madrid, finding a bus to Pamplona and points north! 8-)