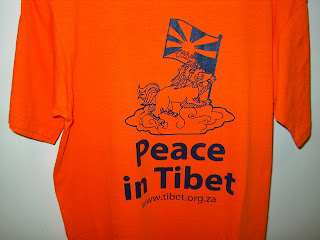 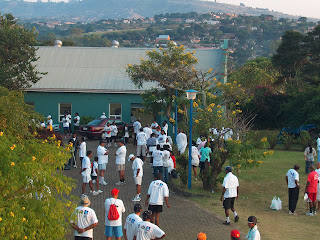 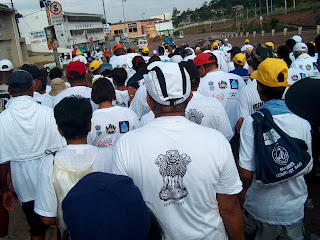 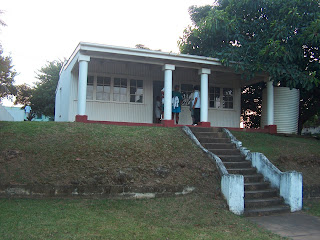 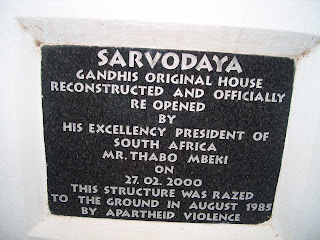 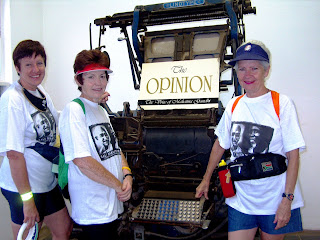 Yesterday we joined the 5th Annual Gandhi Salt march for Peace - a 22.5km 'march' from the Gandhi settlement in Phoenix to Battery Beach in Durban. The invitation I received for the march was from the Tibetan Society. Geshe Dhonden-la, a Tibetan Buddhist monk walked with the marchers but because of the recent news headlines, when the Dalai Lama was refused a visa to attend a Peace Conference, it was decided that marchers wear the Gandhi-ji t-shirts instead. Val was away down the coast and Marion had a cold, so it was Linda, Glynis and I who did the walk.

We arrived at the beachfront at about 5h30 and were taken to Phoenix by bus. On the bus we were issued with special t-shirts to wear on the march instead of the Peace in Tibet shirts. In the 1980's the house that Gandhi lived in was razed to the ground in political unrest. In the late 1990s, the settlement was restored and substantially reconstructed. It was opened as a heritage site in February 2000 and now forms an important local tourist attraction with a museum containing the old printeing pressed used by Gandhi.
It was a long, slow, shuffling march that took us almost 5 hours walking on the side of the busy North Coast road. The organisers did a great job of controlling the marching mass but a few people fell, tripping over the person in front, or being tripped by the person behind them.
We didn't bother to queue for our medals - or for the free vegetarian meal afterwards - and headed instead for the shady deck of the Suncoast Casino where we had something to drink before driving home.
Posted by Sil at 11:29 AM