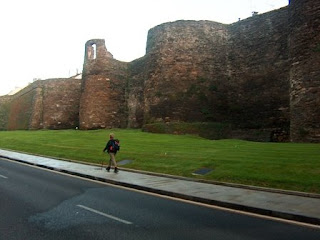 MarionI missed Val´s alarm clock this morning - Syl had set hers but for some reason it did not go off, we didn't really oversleep, were up at 6.15 and at the bus stop long before our bus was due. We went into the cafe to get something to eat and drink.
It was a 2hr bus ride to A Coruna and then another 1 1/2hrs bus ride to Ferrol, by the time we reached Ferrol it was already 12.30 so we dicided it was already quite late to begin walking 25k´s so caught a taxi 1ok´s to Neda. Although the train and bus ride were very scenic it was great to get back on the road, was a bit tired of 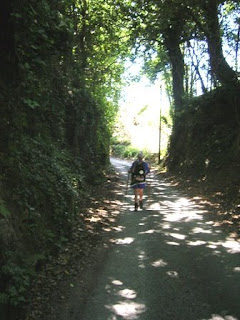 sitting for so long. The secenery is very different here in Galicia, today we will be walking on the coast. We started off walking at 1.30pm and very soon we were on a secondary road climbing up and down (mostly up) with splendid views of the River Estuary. We walked through a few villages as one ended so another started. We walked through a couple of wooded forests, sometimes on grassy paths with grass almost as tall as us, some sand and rocky paths and some gravel and tar roads. All our walking today has been mostly in shade and it seemed mostly uphill. Always with pretty flowers alsonside of us and lots of wild cherry trees.
All of a sudden coming down a slope we could see a large beach full of people. The beach is in the village Cabanes 1k from Pontedenme where we stayed the night. We walked down to the beach and then along the promenade to our village. The guide book suggested that we go to Bar Louis as they have rooms to let, we found Bar Louis quite easily and have a very comfortable room. 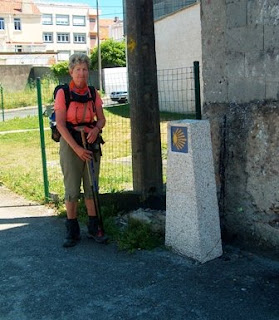 This part of the camino doesn´t have many albergues so we will mostly stay in rooms or hostals. We settled in and both of us were hungry so went out to find something to eat. As usual most places were closed and would only open for dinner at 9.00pm far to late for us. It was 6.00pm and we really did not want to wait until 9.00pm. We walked around for a bit and luckily found a cafeteria adjoined to a hotel that was open and had a delicious salad and large plate of chips.


SilWe left the Hotel early and made our way around the ancient Lugo wall to the bus station. Two years ago, Marion, Finn, Anneliese and I walked the circumference of the wall along the walk way at the top and I still have a certificate on my wall at home that I received in 2004 after giving a donation to help preserve the wall. This time we kept to the lower 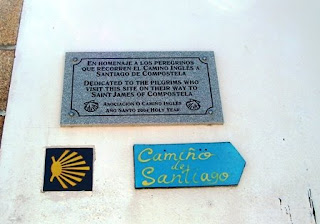 pavements on our way to the station.
Depressing places stations. Especially over a weekend when there are few people and nothing is open. We discovered that there were no buses to Ferrol until 4pm so we opted on taking a bus to A Coruna and another from there to Ferrol.

We got the 8h10 bus to A Coruna, a 2 hour trip north to Betanzos and then veering west to A Coruna. We just missed the 10am bus to Ferrol and to wait an hour for the next one which was a slow bus and would take 1.45 hour to get there. We headed south to Betanzos again and then veered east towards Ferrol arriving there at about 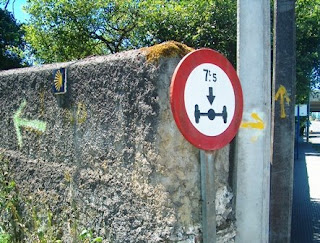 12h40.
When we got there we had to decide what to do. Start walking to Neda 10 kms away and spend a night there: start walking the 25kms to Pontedeume (our original plan) which could take us ± 7 hours depending on the terrain. That would mean getting there at 8pm - too late for us.
Third option was to get a taxi 10km to Neda and start walking the rest of the 15km from there. We opted for plan 3 and took a taxi to the church of Santa Maria in Neda and started walking at about 1h30pm. The distance would still qualify Marion for a Compostela .
At first it was confusing following the arrows - 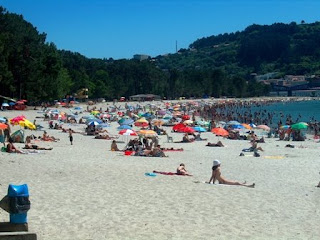 some psychedelic yellow or green, others blue, some road paint yellow. Once we got used to the different signs we were fine.
The camino Ingles is very well marked with arrows and stele with shells. We hardly ever had to check Johnnie Walker´s notes but did so whenever there were confusing signs. It must´ve been a nightmare planning this route through forests, away from main roads, around little hamlets, industrial estates, across fields and through small hamlets past subsistence farms and alleys behind people´s houses.
Eventually we arrived at Cabanas at about 4:30pm to find thousands of people crammed 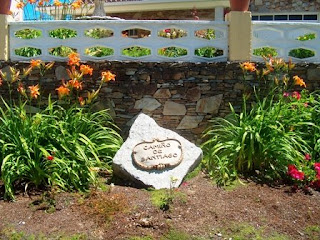 onto the beaches and under the trees with cars jamming the little road we had to walk on to cross the river Eume into Pontedeume. We followed Johnnie´s directions, found the road San Augustin and Bar Louis (with the help of a kindly gentleman at a nearby bar) and were soon ensconced in a comfortable room with a modern en suite bathroom, all for 24€ for the room. Excellent value. Once washed and sorted we went out looking for food. Nearly every bar was closed to diners but we found the cafeteria at the Hotel across the road and a woman took pity on us starving pilgrims and made us a large salad and plate of chips with bread and vino. We scoffed the 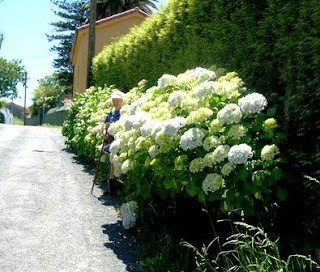 lot and returned to our room.
It was hot in the room so I tried to lift the metal, sliding window. It slipped and fell straight down, jamming the fingers on both hands between the bottom frame and the window. EEEEish!! It was like a guillotine and I lost my breath before shouting at Marion to open the window. The middle three fingers on my left hand were bleeding on top with deep purple blood blisters on the soft fleshy underneath parts. The right hand was more painful as they had been caught on the knuckles and were swelling fast. I ran to the bathroom and put them under a running tap. Marion went across the road to the cafeteria and told them she needed ice by pointing at 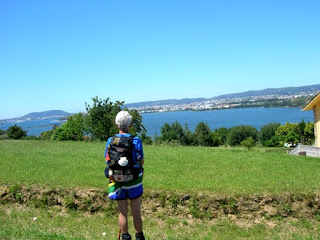 someone´s drink. We put the ice in my facecloth glove and I held the cloth in both hands. If the window had been any wider open it might have chopped my fingers off! All I could think of was "How am I going to work at the albergue in Corcubion with broken fingers??"
I took two anti-inflamatories and, unused to drugs, they knocked me out. I was fast asleep, hands on my chest like a mummy in pose for the rest of the night.