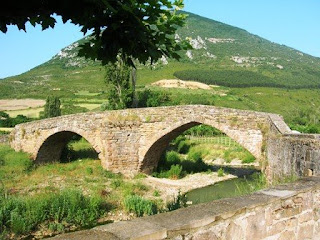 Marion
We had such an enjoyable stay at Izco,Val will tell all about it. This morning we again started off in cool weather which makes walking comfortable and easy. By 11.00am the sun had burnt away all the clouds and it became quite hot. Shortly after starting today we walked through a wooded forest and then through a small village that came to a dead end as there was a pond where we should have been walking, there was no way of us getting around it so we had to retrace our steps back through the village and take a detour across the road 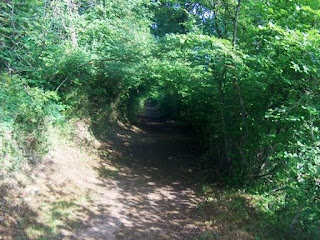 onto a sunken path beside the river. We soon joined up with our orginal path. We walked through and between a lot of wheat fields and then through a forest path with trees ever so high the lower branches creating an archway for us to walk through. It had rained during the night and droplets of water were still dripping down from the branches and one could smell the earth. It was wonderful, I could have carried on walking that way the whole day!!
We then carried walking on a very narrow path up and down (mostly up) some places ever so slippery, in the steep slippery sections one had to go ever so slow. Sometimes when you put 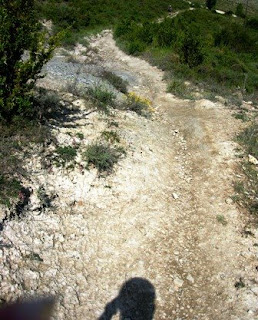 your stick down their was no ground you just had fresh air that was how close we were to the edge. You could see the road far below us and also the new canal that has been built close to the road. The canal stretches for miles. Lunch time we found a platform of cement under a chestnut tree outside a deserted village so decided to stop and have our lunch. Well!! we had hardly sat down and we were covered in tiny insects. We all jumped up so quickly - luckily we had not taken out any food yet. The insects had falled out of the tree, we quickly moved out of the way of the tree and settled on the grass to enjoy our lunch and have a rest.
After lunch we were back on narrow sometimes slippery path mostly climbing up, we walked through a village that the guide book described as an arty village. It did have a lot of arty fixtures round but unfortunately no facalities and all the houses seemed to be locked up so we carried on up and up and then a 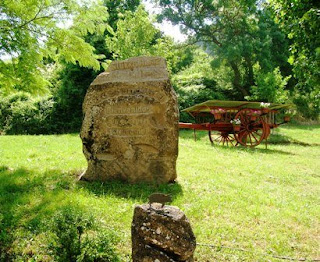 short way down to Tiebas were we stayed the night. A tough day but ever so enjoyable.
It is quite amazing, whatever village we come to we hardly ever see any locals in the streets during the day. Cannot undertand where they are. Sometimes you see a few old men, very smartly dressed sitting on a bench in the street. It seems the children go to school away from the villages and only come home at 5.00pm.
Val - Minister of Nutrition
A tougher walk today, lots of climbing on stoney paths but beautiful views from high up. Then we come down steeply only to have to go 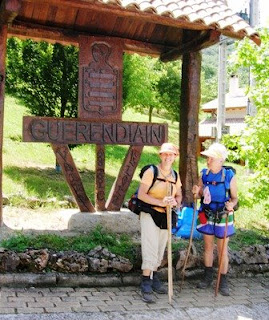 up again to the village. As we walk to the Albergue we pass a bar and the owner is just arriving so I ask when he opens and he says 4pm. They advertise that they serve a Pilgrim menu...once again there is no supermarket, absolutely nothing. Today however, Marion and I had a delicious boiled egg with salt and bread...we managed to buy two eggs from the lady's supermarcado cupboard and Marion managed to cook them before the electricity blew so we ate them on the steps in a small village enroute today. The Alburgue is tiny, 3 bunks and two men are already there so there is just room for us. The kitchen and bunks are all in the one room. There is a shower cubicle with room to change in private and one toilet. Later we discover there is another room with mattresses on the floor where a gorup of young cyclists are bedding down for the night. There is no set charge for the accommodation - you just make a 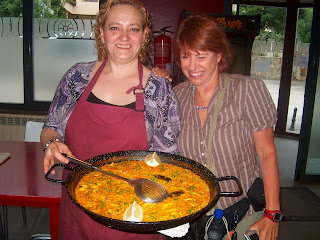 donation. We all have a lie down and then the German gets up to leave. The young Spanish guy George, is staying over. He says he is a Chef and will cook for us...there is no food in this place so we can only imagine that he was hoping we had brought some with us and he would be fed in return for cooking!
At 5.30pm we head for the bar. The lady here is Brazilian and is so friendly and kind to us. We have a glass of wine and coffee and ask what time we can eat. She says around 7.30pm which is fine. She shows us the pilgrim menu and then offers Paella...yes please! Marion and I will share it as Syl is a vegetarian. Neither 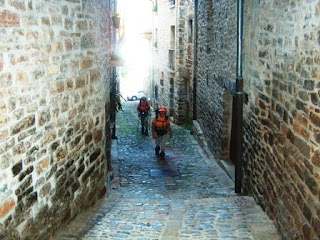 Spain nor France cater well for vegetarians and Syl inevitably ends up with a salad and fills up on potato tortilla or biscuits, cakes and chocolate poor thing. Two hours later Marion and I have polished off quite a few glasses of vino tinto and are starving. The Paella arrives and is easily enough for 4 - it is superb, with calamari, clams and prawns. Perfect rice and obviously a lovely stock has been used. George is at the bar and doesn't have any money for food so we invite him to join us and share our Paella. The meal comes with another bottle of wine! This lovely meal and our wine and coffees cost just E13 each. The meal also comes 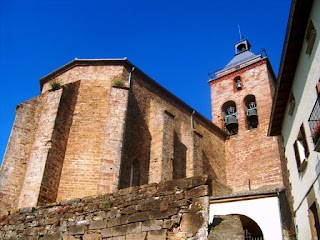 with fresh fruit which we save for breakfast the next day. During the night there is a terrible storm overhead and a huge amount of rain. In the morning we had our melon for breakfast and Myprodyl for the hang-over...Marion reminds me that she and I together (and we think with Gorge) ..pretended to be the bulls in the "running of the bulls"!!
Sil
We weren´t planning on staying at Tiebas. I had copied the diary of a pilgrim who walked the route last year and she said that the albergue in Tiebas was dirty and uncared for. 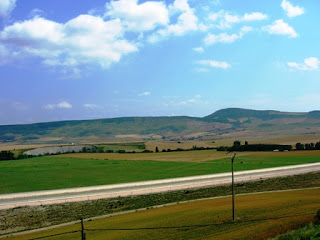 However, we were on track for a stay at Eunate so decided to walk further than Monreal and head for Tiebas.
Sometimes the camino lulls you into a sense of false camino bliss. ¨I love these kind of paths´I said to M and Val as we walked along wide gravel paths through fields and farms from Izco . No sooner had I said that, when the path became a forest path, then a double track on stones and clay, then this disintergrated into a single rocky path no wider than one boot. We started climbing up the side of the mountain and down the other, through a stony gulley, then up and down rocky gullies all the way 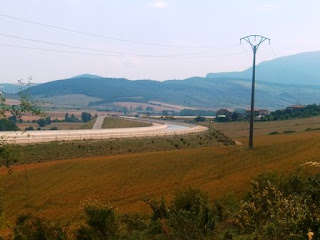 from Monreal to Tiebas. It looked the Sierra Nevada with steep, pitted sheep tracks hugging the side of the mountain, taking you halfway up the hill and dropping you down, down down on the other side. There is a village on a hill across the valley and we keep thinking that it might be our refuge for the night but we keep skirting it, hiding from it, then it appears again.
Eventually we see Tiebas - also on a hill but on our side of the valley. As we approached Tiebas we could see the ruined castle of Teobaldo 1 of Navarra. If we´d had more energy we might have explored it but we were too hot, too dehydrated, too weary to do more 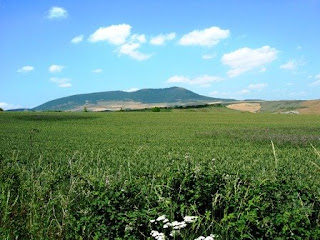 than follow the flechas amrailla to the hostel which was way over at the other end of the village. Once again, this room forms part of the Community Centre and besides our small room with just 4 bunk beds, it also has a large room with matresses on the floor for groups. A German pilgrim who we had come across earlier was lying on one of the beds and Jorge from Barcelona was eating at the table. The shower room was swamped with water but I found a mop and pail and mopped the floor in the shower, toilet and entrance hall and it looked spick and span. I found flowers in the garden outside and put them in a plastic cup on 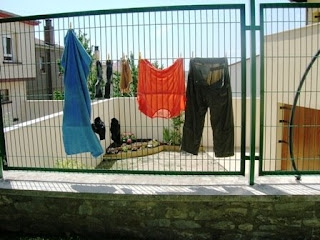 the table. The little room suddenly looked very welcoming! Considering that there is no hospitalero and that payment is donativo - into a metal box on the wall- one can´t complain about the accommodation. We had a lovely meal at the local bar and I gave a South African pin badge to a young boy who was prepared to reply to me English when I spoke to him. Tiebas is a clean, attractive village and we found the locals helpful and friendly. Val and Marion livened the place up on the way home - giggling and playing matadors! I'm not sure who was the bull!
Posted by Sil at 2:30 AM