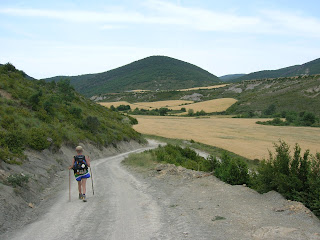 Today we decided we needed to start a bit earlier so that we could rather walk most of our walk in the cooler part of the as as it so very hot by lunchtime. Val´s alarm went off at 6.00am this morning so we were up and out of the room to dress in the passage so that we did not disturb the others. Can you imagine all of us standing on the steps with all our belongings, folding up our sleeping bags, puting everything in our backpacks and getting ready to go and then creeping down the stairs then to the kitchen to get our breakfast. 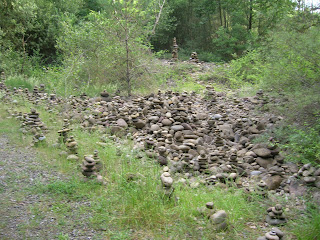 We were on the road by 7.15am. Most of our walking was through farm land lots of golden wheat fields with a scattering of wild poppies every now and again. We walked on a path of sand and stone lots of wild flowers alongside us. It was quite flat and again very hot with very little shade. We stopped at a little village called Martas, unfortunately no shops at all, so no coffee. Luckily we saw three elderly men sitting on a bench and the one showed us where we could get some cold water to fill our bottles. We then walked through the Lunar valley, it was quite weird, hills that are soft rock, grey coloured and it looked like they had 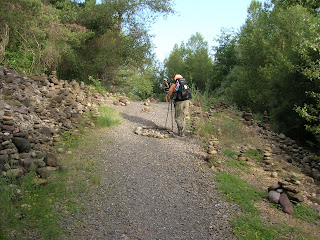 a top layer of very fine looking gravel. The village that we were going to stop at Artieda was on a top of a hill, it was quite a climb. At the bottom of the hill was about a dozen Royal Eagles flying around and whilst I was walking up I could not help but wonder if they were watching to see if I would make it to the top and if I did not would I be good food for them. I was exhausted by the time I had reached the top, at first could not undrstand why I found the day so tiring but then realized how I had perspired in the heat and had not had enough carbs and salt, also had not had enough to drink. I straight away started drinking water 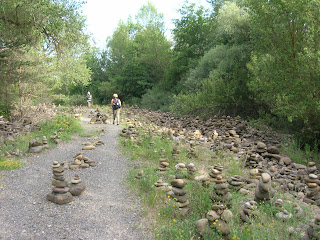 and eating carbs and some salt. Even though it was a tiring day it was wonderful.
Val Minister of Nutrition
We are up early today = we want to get a head start and so it is dark when we awake. The alarm has been set for 6am and my cell phone is our alarm....but the battery is running low and I have to leave it plugged in at the bottom of Marion´s bed...I am above her in the top bunk. As such I say, Marion when the alarm goes off in the morning you must quickly turn it off so it doesn´t disturb the others. It duly goes off at 6.00am, and off and off....I lean over 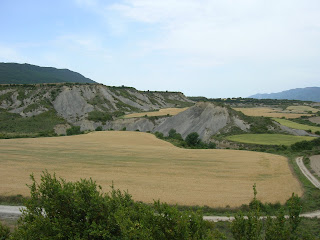 the bunk and whisper Marion, Marion....she cannot hear me...´the poor French girls head is next to the bench that the phone is on and in a sleepy voice says "oh Sil o plait, oh sil of plat....which interpreted comes out like the teenagers say " oh pleazeeee" finally Marion awakes and unplugs the phone and hands it up to me....my sorry´s do nothing to compensate for the intrusion....we all sneak out and then go back and back again to move our things from the Dorm to the landing to dress and sort out....I have dreadful eyesight so put on my head lamp and go back into the dorm, careful to keep my head low so as not to disturb them 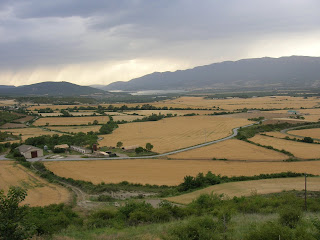 further...but the poor French girl´s head is just where I need to be and my head lamp shines right on her head...."oh Pleazeeeee"...I think this morning I have crossed the line of Pilgrim etiquette! One does not wake up nor disturb fellow pilgrims.
We go downstairs and prepare our hot chocolate with hot fresh milk (actually it is longlife in a carton but by fresh I mean it is not in a packet). We have a breakfast bar and a banana so lots to eat and there are some late comers who are sleeping on the lounge furniture and ´hiss at us´to shutup. We give up and leave. There was a storm during the night 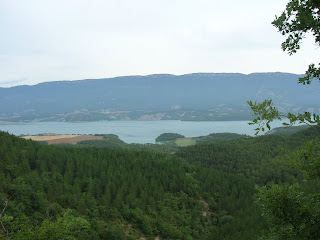 and it is very humid. Eventually the sun comes out and there is no escape as we are in the open...quite a slog today on hard gravel paths and not much variation so you feel every km. After about 5kms I could feel my left foot stinging. I discovered scourers/sponges last time were great for putting under your bra straps to support the back pack straps - as long as you remembered to put the sponge side on the skin and scourer part against the bra strap. I hve been using them to cushion the balls of my feet, toomany pedicures have made my feet too soft. Finally I have to stop and discover that I have put the sponge around the 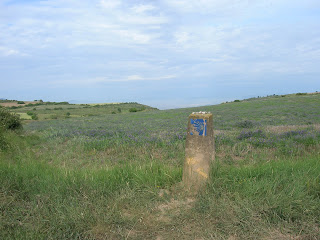 wrong way and had the scourer against my skin and I have literally grated the underpart of my foot. I had rubbed raw. Nurse Syl comes to the rescue and dried it off with spirit and rosemary and then applied a dressing and the rest of the journey was fine. We could see our village high on the hill and it reminded us of Tuscany. We climbed and climbed andwere greeted by a lovely woman and daughter - her Albergue was also the only bar, restaurant in the place, what luck!! There were no shops and they relied on deliveries. They showed us to our rooms and once again, spotlessly clean. Asked if we would like to eat and offered us Tortilla and Salad - 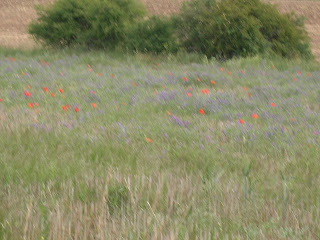 yes please...we had cool drinks and coffee and vino tinto. My first spanish meal. There is no internet so we will write our blog and publish when we can...have a shower and afternoon nap as they have offered us supper at 8pm and breakfast at 7am...more than we have eaten in days. We got caught out today and walked all day on a banana, apple and a third of an orange.We ask if we can get a taxi to drop us at the next village as we are a bit behind now and need to catch up about 8km to guarantee somewhere to sleep. yes we are the taxi also she says! The wind is up now and it is trying to rain (5pm)We get ready to go down and I go to 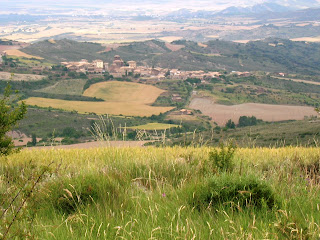 climb off the top bunk...it is so high I can reach the ceiling without stretching...I crawl to the end and turnaround to come down and Syl shouts " the ladder is on the other side"...we nearly have spatchcock Val. Tonights meal is green beans, large runner beans cooked with potatoes and small dice of ham. Followed by Tortilla (which we have a lunchtime so gave that a miss), beef ragu or sausages. I choose sausages dreaming of a Spanish casserole of spicy sausages, Spanish onion, garlic, peppers and perhaps some smoked Spanish Paprika...no...4 chipolatas and chips!...followed by commercially packaged 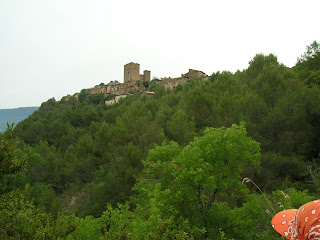 ice cream, tinned fruit salad or flan.. I choose flan which turns out to be a prepackaged creme caramel...I woof the whole lot down! Breakfast is lovely coffe, half a slice of dry bread with preserves. Also Magdamena´s...cupcakes which taste stale. However, all of this together with our accommodation cost 28 euro....The Spanish are really lovely people......
Sil
Today was a much better day for me. After the heat of yesterday and the challenging climb down from San Juan de la Pena, I found today´s walk a breeze - long and relentless, but
easy all the same. 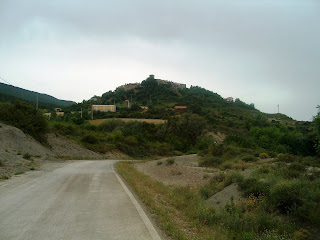 The paths were mostly wide, open gravel or sandy paths and although it was hot we were able to stop three times for a backpack off and snack break. Val and Marion seem to find the long, flat paths more tiring than I do and it my turn to be encouraging.
We realise that we need to take in more salt and perhaps more proper carbohydrates. They eat more bread than I do but I prefer fruit and yoghurt - neither of which really replenishes salts and fluids lost by a long day´s walk. Artieda is on a hill (what´s new) and as we walk in we see a vehicle parked on a side alley with a taxi advert 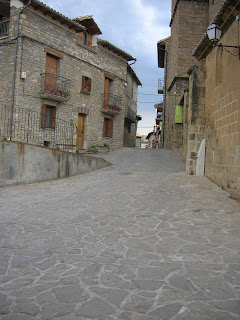 in the wondow. Such a tiny place with a taxi service! It also has a telephone box and I try to phone home. My card works for Marion to phone Kim in JOhannesburg but doesn´t work for me to phone Finn. I´m starting to feel home sick and need to speak to my family.
The albergue is in a hostal - some private rooms and some dorm rooms. Our room has two double bunks so we are alone in the room.
After a lunch of Tortilla Espanol and salad we had a nice hot shower and sorted out our packs. Marion and I walked to the end of the village and took photos of a stunning view of the valley with rain clouds slashing the Yesa dam. Dinner is a communal one and we shared our dinner table with three German pilgrims who could all speak English. After dinner, a French pilgrim asked the owner to take a photograph of all of us so we trooped outside for a group photo. I ask the woman in the restaurant if we can contact the taxi to take us to Ruesta tomorrow. "We are the taxi" she says. "We are the hostal, the shop and the taxi - todo!" So, we arrange for the taxi to take us 8km down the road tomorrow morning so that we can get back on track to reach Pamplona in time for Val's flight and our trains.
Posted by Sil at 10:28 AM