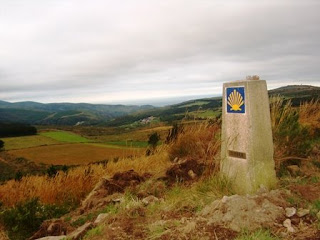 I had planned on walking for at least 4 days to Finisterre but with the albergue at Corcubion closed I decided that I would just walk all the way to Finisterre today.
Yesterday had been a long walk - over 32km - and today would also be a long walk if I walked all the way to Carbo Finisterre, the lighthouse at the énd of the world´. - about 36km by the time I walked back down the hill from the lighthouse.
The first pilgrim got up at 5h30 and my cell phone alarm went off at 6am. Conny was getting up so we packed and walked together to one of the bars for a cup of chocolate - she a cafe on leche. 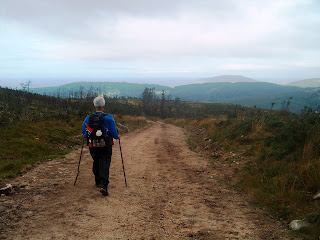 "Are you going to walk to Finisterre or Muxia?" I asked.
"I don´t know" she said. "I´ll see when I get there!"
We walked together until we came across another open cafe bar just before 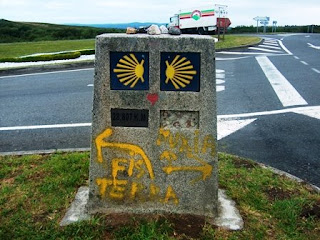 Hospital where the routes to Muxia and Hospital split. Conny decided to stop for a coffee, I decided to walk on, so we said goodbye and promised to email each other. As I passed the cafe bar I saw Pete, the pilgrim from Holland I'd walked with the day before. I walked ahead for quite a while and then he caught up and we walked together for a while. It started to rain so I put on my raincoat.
The route leads you onto a high platteau with wonderful views on both sides. The 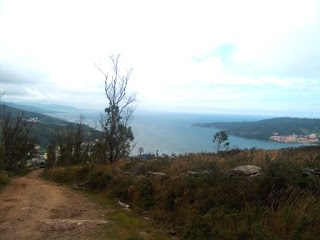 wind was quite strong and it was the coldest I´d felt since France. I caught up to Pete and we walked together into Cee and Corcubion at about 11am.
"I´m going to stop for a drink" I said.
"Me too" he said. But, it is fiesta in Corcubion and we walked for ages before asking someone if there was a cafe bar open anywhere.
"Only one" said a local, "it is fiesta so everything is closed".
He directed us to the only open cafe bar in Corcubion and we had a hot chocolate and a Madelena before continuing. The path took us up a rocky little trail between high, ancient stone walls. Then we were high above Corcubion and 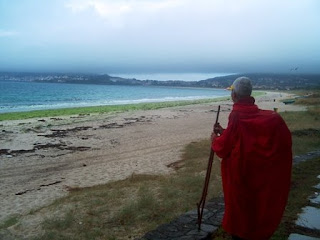 after a km we came across the albergue with all the fiesta paraphanalia set up outside. We walked on in the rain. I stopped to put my raincoat again and and Pete carried on going so I walked alone for a while but caught up to a pilgrim from Switzerland (another Peter) and he and I walked together down to the beach and along a long paved promenade that strecthes for a few kms all the way to Finisterre. When I arrived at the albergue I saw Pete and he told me that it only opened at 4pm so I put my backpack in line on the pavement and joined Pete and some other pilgrims at a bar across the road. We ordered a large plate of chips with ketchup and Mayonaise 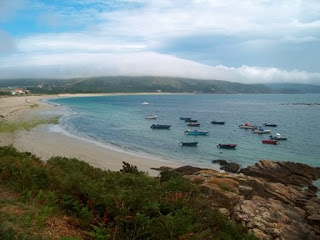 and sat eating hot chips and drinking Coke for an hour.
The albergue opened at 4pm and it was Ana and Begona who were the hospitaleras. I was shown up to the dormitory, had a shower and washed my undies.
"Hello Sylvia" I heard. It was Bernice, a RSA pilgrim from Johannesburg who walked the camino from St Jean to Santiago and had got the bus to Finisterre today. We made arrangements to see each other later and I left to walk up to the lighthouse with an Australian girl I´d met a few days ago. On the way down I bumped into Bernice again and we are hoping to meet up again tomorrow for breakfast.
I spoke to Begona about tomorrow and she said I must leave my backpack in the room and come back at 4pm. Then, on Wednesday I can go to Corcubion and start at the albergue.
When I cleared my didgi-walker this afternoon, it read 36.5kms. I don´t really feel as though I´ve walked that distance - about 68km in two days. I´m almost tempted to walk to Muxia tomorrow with a smaller backpack, but I´ll wait and see how I feel in the morning - and what the weather does.
Finisterre is a lovely little fishing village and I´m going to stop and watch the gulls fighting over fish on the beach before I go to bed!
Posted by Sil at 11:13 AM

Sil, I am waking as you are sleeping I know...and quite possibly you won't get to see this in time... but someone I know who walked to Muxia last year said it was very very beautiful, and it was his favourite place on the whole walk to Finisterre.

Hi Sil looking at your photos and reading about your journey from Santiago to Fisterra brought back happy memories of when I walked that way in May 2008. But seeing the picture of the decent into Cee on that hard track brought back the pain of 'blown' knees! Nothing that good soak in the atlantic couldn't cure though.
Thanks for the camino 'souvenirs' I hope you got your Fisteranna.
Nell

I'm very thankful to the author for posting such an amazing development post.This is a fantastic survey, very nice write up,Thanks you for sharing.

Hi. I wanted to drop you a quick note to express my thanks. I've been following your blog for a month or so and have picked up a ton of good information as well as enjoyed the way you've structured your site.

Muxia was the most wonderful place to end the camino. I did it in 2007, beeing told by a hospitalera in St. Maria de Eunate, And she was right. I did not go to Fisterra, because I liked Muxia a lot more.
Michael ( www.jakobsweg-2007.de )

We visited Muxia but didn't walk there. Next time I intend walking the round trip from Santiago to Fistera and on to Muxia.

I had enough time to walk from Santiago. And as I had planned to end up in Fisterra I first walked to Muxia but then I decided never to go ton again because for me it was the best place to finish my pilgrimage. I spend the last day by sitting at the church, reading/writing my diary and to enjoy the sun and the sea. Then I returned to Santiago by bus and went back to Germany by bus, too.( www.jakobsweg-2007.de)