Accident and Angels on the way to the Dragon Mountains 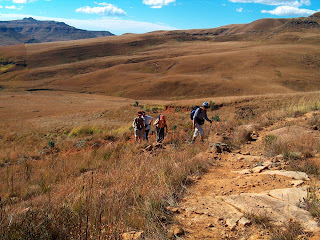 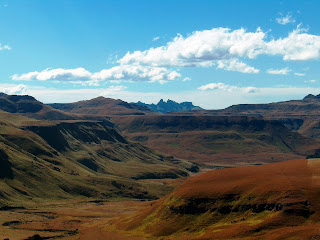 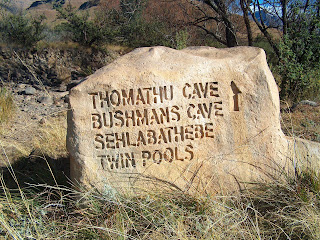 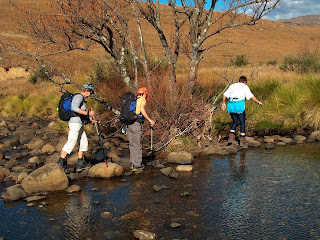 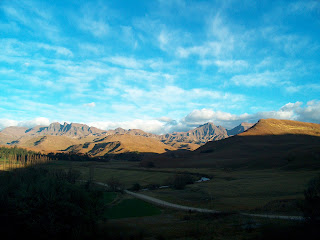 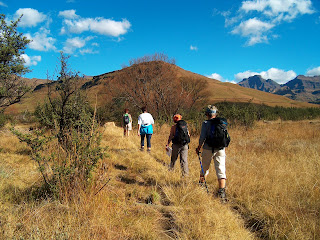 Last weekend we went to do some hiking in the foothills of the southern Drakensberg Mountains that stretch for over a thousand kilometers along the interior of South Africa from the Cape in the south, along the entire length of Kwa-Zulu Natal, forming a natural border between Lesotho and South Africa.

Wikipedia: The highest peak is Thabana Ntlenyana, at 3,482 metres (11,420 ft). Other notable peaks include Mafadi at 3,450 m, Makoaneng at 3,416 m, Njesuthi at 3,408 m, Champagne Castle at 3,377 m, Giant's Castle at 3,315 m, and Ben Macdhui at 3,001 m. All of these are in the area bordering on Lesotho; north of Lesotho the range becomes lower and less rugged until entering Mpumalanga where the quartzite mountains of the Transvaal Drakensberg are more broken. The Blyde River Canyon in Mpumalanga is within the Northern reaches of the Drakensberg, though its geology appears different due to the lack of a Basalt cap. South Africa's Drakensberg mountains are home to the world's second-highest waterfall, the Tugela Falls (Thukela Falls), with a total drop of 947 metres. 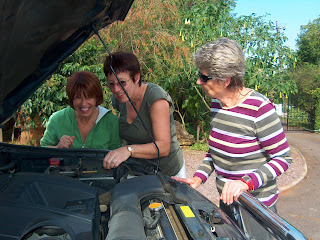 Camino pilgrim, Tricia from Empangeni, invited a group of us to spend the weekend at her timeshare in the Bushman's Nek Resort. Tricia drove to Durban to collect Lorraine (also a camino pilgrim) and on Friday morning Marion picked me up, then Glynis and Linda and drove us to Val's place in Kloof. We loaded Val's trailer with food, wine and hiking gear and settled into her Pajero with Amy Winehouse crooning on the radio.
When she tried to start the car it made a strange 'trrrrrrrr.... trrrrrrrrr..." sound. After a few phone calls and reading the onscreen message we realised that the battery was flat. Glynis, our girl-guide supreme, helped Val find jumper cables in the garage, Marion brought her car close to the Pajero and after a while the Pajero roared to life! We were off!
Bushman's Nek is about 250k from Durban. I phoned Tricia on her cell phone to tell her that we would be running about an hour later than expected and she told me that they were almost at Underberg - just 35km from Bushman's Nek. 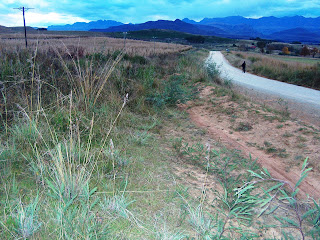 Accident:
We had an easy drive to Underbeg but as we reached the small town I got a call from Tricia - they had skidded off the gravel road on a bend, literally flew over a gulley, crashed into the brush and ploughed through brambles and thorn trees, hitting a log jutting out of a deep donga. When the shocked women came to a halt, Lorraine (a physiotherapist) asked Tricia if she was alright.
"My back..."said Tricia.
"Don't move," said Lorraine, "I'm going to see if I can flag down a car for help."
Lorraine got out of the car and fought her way through the sharp brambles to the road ripping 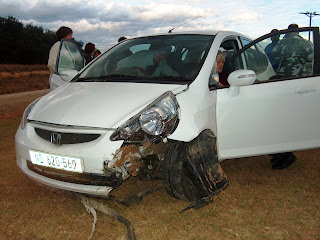 her exposed arms and legs.
We came upon them an hour later - Tricia still shocked, sitting in the passenger seat, Lorraine with blood splashed on her clothes, her legs and arms a mess. The badly damaged car had been pulled out of the donga by a tractor, using a chain belonging to another good Samaritan.
Another motorist who'd stopped was on his way to Bushman's Nek and when he arrived there he told them what had happened and they had sent a vehicle to collect all Lorraine & Tricia's luggage. A paramedic and an ambulance soon arrived.
They strapped Tricia to a spinal stretcher and put her in the ambulance. I went with her and 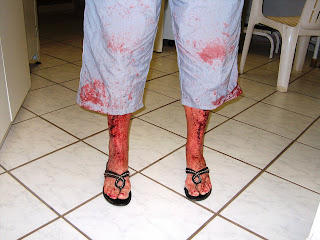 Lorraine back to Underbeg to be checked by the only doctor in town while the other girls continued to Bushman's Nek.
The doctor thoroughly checked both women and found that, besides bruises, whip-lash, lacerations and shock, neither had any serious injuries. (Unlike the little car which appears to be a write-off.) The lodge at Bushman's Nek sent a driver to collect us and we arrived at the lodge just before 7pm.
Angels:
The universe works in mysterious ways. The first 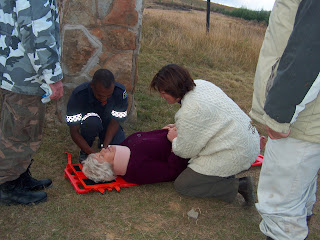 car to pass Lorraine was a couple on their way to Bushman's Nek. They offered to drive on, let the lodge know about the accident so that they could contact the paramedics.
The car that stopped next had a chain just the right length to attach to the car and a tractor that was called in to help. The woman in the car said that they had missed their turn and should not have been on that section of the road. "You see, we were meant to be on this road at this time,"
said her husband.
A woman in the second car to arrive said that her mother, who lives 300km away in Port Edward on the South Coast, knew the farmer whose land bordered onto the road where the car had crashed. She called her mother, who phoned the farmer, who was able to radio for help.
Lorraine also contacted her son-in-law who told her that he knew the only paramedic in Underberg, and that he would contact him. The paramedic had not received the message left by the lodge so it was thank's to Lorraine's son-in-law knowing how to reach him that the ambulance and paramedic arrived when they did.
When the ambulance delivered us to the doctor's rooms in Underberg, he told us that for many months there had been no doctor in Underberg. He had only opened his practice a few weeks earlier. So many co-incidences - or, so many Angels sent to help? 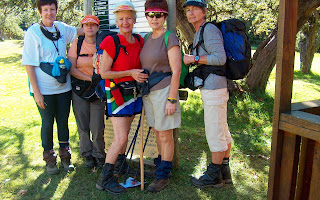 Hiking:
Back at the lodge Lorraine had a warm bath to clean the wounds on her legs and arms. She had pretty 'bling' sandals on and we teased her about putting a post on the blog called "Blood and Bling". We shared a veg lasagne that I had made for Friday night and had an early night.
After breakfast in the morning Val, Marion, Linda, Glynis and I set off to hike on the Lesotho side of the border. It was a beautiful morning and after paying R20 each for a permit to cross the 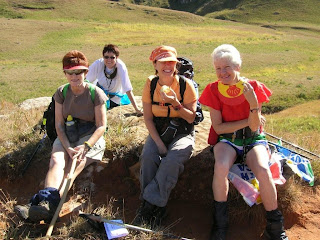 border bewteen South Africa and Lesotho, we followed a path that crossed the river in about 5 places before swinging left up a rocky ridge, high above the riverine valley below. We had missed the path to the Twin Pools and could see people far below us sitting on a rock at the base of the mountain on the other side of the valley. We met up with that group, being led by a guide, when we crossed the river later on.
By the time we got back to the lodge, a nasty wind had sprung up. I stayed with Tricia and
Lorraine - giving them both a neck and shoulders and feet massage - while the others went on a horse-ride - a first for Marion.
By the evening it was a howling gale that grew stronger and stronger during the night, shaking the windows and doors and rocking the lodge on its stilts. Nobody got much sleep and with the wind still howling in the morning we decided not to go hiking but to get an early start home after breakfast.
One of Lorraine's family had friends looking at property in Underberg and they offered to drive her and Tricia back home. We took a lot of their stuff in the trailer. On the way home we stopped at "Puckety Place" - a delightful old house with a farm stall, bottled preserves, cheese, fleece ponchos, hats and scarves, an animal farm and an honest tea garden where you make your own tea, coffee, hot chocolate etc and choose from scones, cakes, or pickles, cheese & bread.
We got back to Val's place and Marion drove us all home.
This was our last country training before we leave in less than 3 weeks time. I had a full dress rehearsal, only taking my camino backpack. Everything worked well but with the 'Berg weather being almost the same as the south of France and the Pyrenees, I decided that we might need a second lightweight fleece and perhaps a scarf and gloves. I also decided to swap one of the shirts I made for an old tried and tested t-shirt.
On Monday, all the clothing I'd used on the weekend was washed and I have now re-packed my backpack - for the 10000th time - and am ready to fly!!
Posted by Sil at 2:51 AM

We all had a great weekend. It was such a pity about the accident but Trish and Lorraine were so blessed not to be bad hurt.
Marion