Marion
Very misty this morning lovely to walk whilst it was so cool. For the first 6k´s it was a long straight road, I thought it would never come to an end. At long last we entered a forest it had a few ups and downs then through farm lands, almost 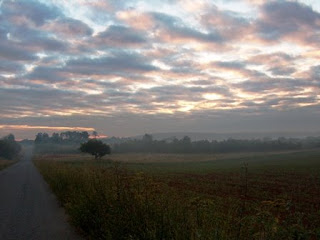 like small holdings. The farms in this area are very basic and simple.
We did walk through a couple of very small villages, everything was closed - so no morning coffee to be had anywhere. The last few k´s before reaching Sigueiro were again on a long straight road. Although it was a shorter walk than yesterday it seemed a lot longer, I suppose because it was mostly flat not much variation.
I look to find the good things whilst we were walking to take my mind off the long flat road, like the quietness, the birds singing etc. as I have to make the most of it as my walk is nearly over, only tomorrow for the last 17k to Santaigo.
Whatever village we have walked through in 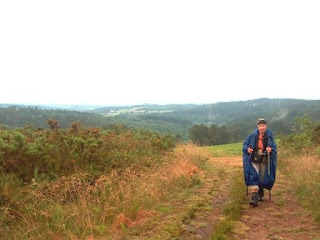 Sil
It was so quiet in the albergue that we both had a wonderful sleep. Hospital de Bruma is one of those tiny hamlets where you first come across a couple of animal barns, then a few houses on either side of the road, most that have their own barns as well, then a small stream, a tiny church and then you walk out the other side. 20 buildings all-in-all, if that.
We had a breakfast and then started walking to Sigueiro. We saw a woman cutting down cabbages. Almost every farmer grows tall, spindly cabbages which Marion thinks are used to make walking sticks.
One map said 22km to Sigueiro, the CSJ Guide says ±24km and Benino said 26km. No importante, we have to walk there no matter what the distance. The CSJ guide says, á pretty straightforward day´and they are not kidding. It was really heavy going with long, straight, tarred or gravelled roads through endless forests. It reminded me of walking through les Landes on the Via Turonensis route.
There were a few hamlets to pass through but nothing opens until around mid-day so we didn´t have a coffee opportunity. By the 15km mark my feet were starting to hurt underneath, something I´ve not had before. We stopped at a bus shelter at the 18km mark and I took off my boots to air my feet. I had red, hot spots under a few toes as well as the insteps and heels. This is a problem when walking on flat, tarred or gravel roads with boots. I added a bit of sheep wool and a small foam padding to the worst spot and hobbled on for another 8km. Long, long, flat, straight roads 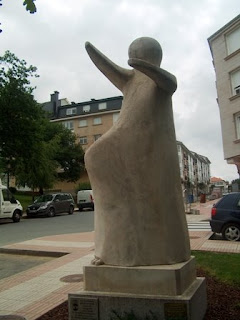 through endless forests with hardly a bird to be seen or heard and no other living thing for miles. At one time it started raining and we put on our raincoats but half an hour later it got hot again and we stopped to take them off.
At the approach to Siguerio the guide takes you down a waymarked path to the local swimming pool. ´´Turn left around the swimming pool, see the final marker pointing the way over waste ground´it says. We battled to find a marker as the whole area is under construction and had been graded and cleared with construction fences and the beginnings of buildings under way.
We found our way to the Hostal Miras, Downstairs was a cheerful bar which seemed to be run by a family of women: mother, daughters and grandchildren – a 15 month little girl who was well at home with the customers, and a new 6 day old baby, who may have been a boy, judging by the blue blanket. Upstairs the rooms are basic but adequate.an old but graceful hostal above a bar, and were taken upstairs to a room. I cooled my 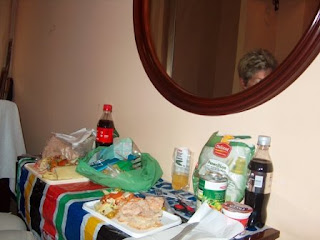 poor feet down with Alcohol Romeo and massaged them with Arnica. Then I hobbled to the bathroom and hey presto! there actually was a bath! I scuttled back to the room, collected my universal plug, and was soon soaking in a hot-tub with Arnica and the last of my shampoo. Bliss. We had a coffee at the Hostal Bar and found this internet Cafe in a bar down the road.
We will arrive in Santiago a day early and will have 2 nights there instead of one. I will be checking out the route into the city as it might have changed.
Posted by Sil at 6:45 AM

Hello Both
Sylvia ...how are your fingers? and now sore feet too! trust that the route has been 'pretty' despite being long and flat (read boring maybe) and that you have enjoyed the sights at least.
Still keeping tabs on your movements, and lovely to read what you are seeing, doing, eating and where you are on your journey.
Kathy pilgrim

Hello! I am in Sigüeiro right now, in the Biblioteca Municipal, right by the abstract scultpure in that off white color with outstretched arms you took a picture of.

This is my second camino, I just finished my first about a week and a half ago, Sevilla-Santiago (Via de la Plata to León, then the Camino Frances). I had some extra time and decided to do the Camino Ingles. I ran across this site doing a bit of research on it, and I read the entry for the day on my phone before I walked everyday. The only day I saw another pilgrim was Ferrol-Neda, my first day on the trail. I felt kind of lonely, like there wasn´t any other pilgrims out there, but this blog helped keep me on track.

I should make Santiago either today or tomorrow...depending what time I can tear myself away from this computer. Its only noon right now...but I also haven´t seen a free computer for a while. Choices, choices...

I met Sue Kenny, the Canadian you mention in the next entry, at the monument to JP2 in San Marcos, my first time in Santiago when I finished my first camino a few weeks ago.

I have a few weeks off before I do more walking, but I´m not done just yet. I´m meeting two friends in Santiago, spending a bit of time in London, then we are doing a section of the Portugeuse Camino in reverse to Fatima (or as close as we can get before we run out of time). Then, I head home to Alaska in time for the start of my next year of college.

Thanks for being an inspiration for me as I walked the English Route!

PS- You´re welcome to write me back, if you´d like. The email I use most is GraceAk01@hotmail.com.

I think walking there is an exciting experience, I'd like to going there, because that place is like a paradise, and it doesn't matter that place being so cold.m10m