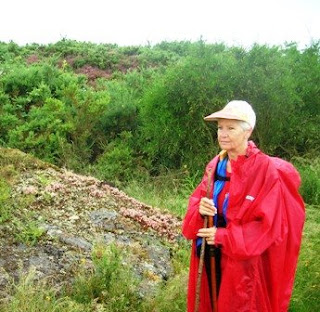 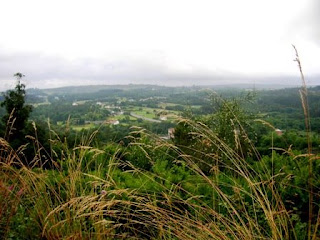 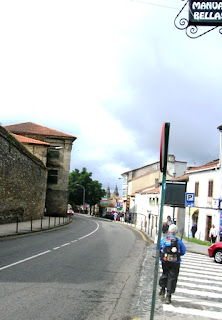 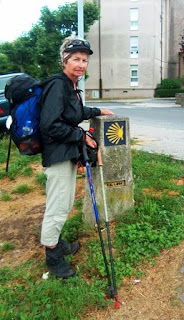 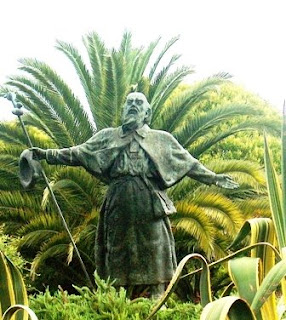 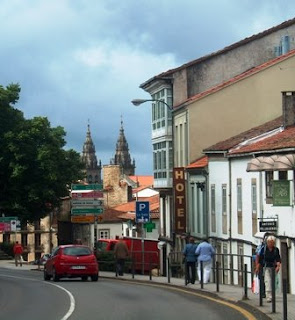 Marion When we started our walk the very first day it was raining. When Val was doing her last day we had some rain. Well guess what - my last day of walking and it rained most of the way on and off. Really enjoyed the walk this morning as most of the way we were back through forests and farmlands, up and down, twisting and turning so much better that the day before on the long flat path. It felt quite emotional to arrive in the square at Santiago, we felt so proud of ourselves of our achievement. I am looking forward to the service in the cathedral tomorrow at 12.00. 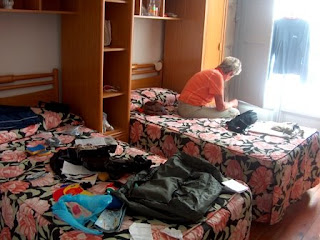 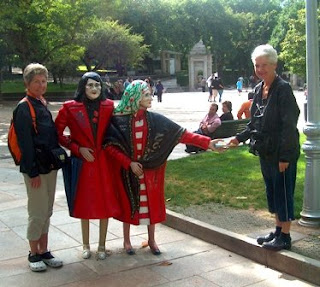 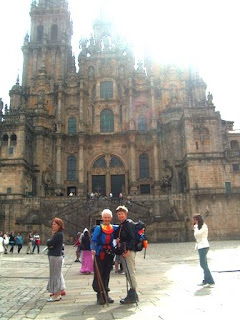 Sil
After the hot bath, alcohol Romero rub and 2 massages with Arnica, my feet felt really good this morning. I put sheeps wool under the toes and a thick Dr Scholl´s blister pad around the spots that stung yesterday. I could feel right away that they would be better today and even though we did 16kms in 4 hours I didn´t have any problems.
We arrived in Santiago this morning after a fairly quick walk from Sigueiro, most of it in the rain. The path was mainly through forest and farmlands and straightforward and besides the odd encounter with a highway, we both enjoyed it. After passing an industrial centre we stopped at a cafeteria for coffee and found that we were the only women in the place. Seems to be a morning meeting place for the local workers.
The camino Ingles comes in to Santiago from a different direction to the Camino Frances but we still had to go under the arch with the cathedral on the left. There were no arrows after we walked through a 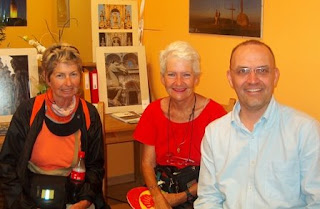 park on the outskirts so we had to follow John Walker´s CSJ guide into the city. There were no changes to the route although John thought there might have been a change. The square was crowded with people (mid-day) and we gawked at the cathedral, hugged each other and asked someone to take our photograph. It is quite strange to see so many pilgrims and know that there isn´t one you have met along the way. We did not see one other pilgrim on the Camino Ingles, not even a cycling pilgrim. Marion commented that it didn't really feel like a pilgrimage because of the lack of other pilgrims to interact with. 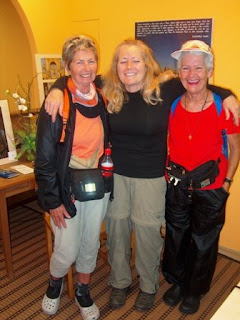 When we got to the Hostal Pazo de Agra Fernando gave us a cheery welcome and took us straight upstairs to our room - pay tomorrow he said. We walked back out of the old city to Ivar´s Camino Travel Centre to collect my parcel. Whilst there I recognized a voice and there was Joy Anderson from the south coast (the lady who let me know the day before she was leaving that her pack weighed over 10kg). She started crying and screaming when she saw me and hugged me and kissed me like I was her long lost sister! Ivar and Marion and one of Ivar´s friends, Frank, looked on in amazement.
Then another woman walked in and I said, ´Hello Sue¨. It was Sue Kenny, a Canadian pilgrim who has written a book on the camino and a video called Las Peregrinas. Sue looked a bit baffled and then Ivar said, ´This is Sillydoll from South Africa!´ Then there were more hugs and more exclamations of surprise and amazement. She and I hugged and kissed and we all had photos taken together.
We queued at the Pilgrim´s Office for Marion to get her 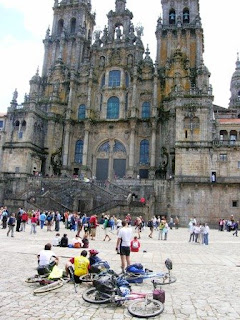 Compostela (I asked for the tourist certificate) and I had a chat to Maria who I met in 2002, 2004 and in 2007.
M and I have just been to lunch and to the Info centre next to Hostal Suso. I collected some papers on the Fistera route and then we went to lunch. I sorted the stuff in my parcel and posted most of it to the Correos in Corcubion so that I don´t have to carry extra stuff while I walk to Finisterre. I think I´m going to leave a little earlier than originally planned so that I don´t get to the first place too late.
We haven´t decided 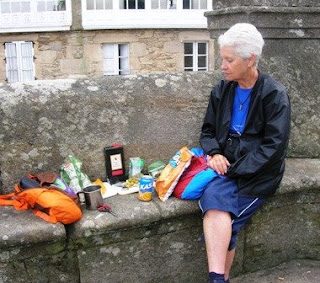 what to do tomorrow besides go to mid-day mass. Will wait and see.
It is great to be back here (the 4th time I´ve walked into the square) and it was quite an emotional moment.
Posted by Sil at 6:29 AM

Hello Both
So pleased for both of you ... could almost feel your emotions as I read what you had written. What a coincidence to meet these people you know ... and how special. enjoy your day. Safe trip home Marion .. and go well Sylvia on your journay forward.
Kathy

Great to see you standing there in front of the Cathedral sil, and lovely to see a photo of you with ivar. Hope your hospitalera stint is not toooooo exhausting! I have been especially glad to read your info about the Camino Aragones... inspiring!

Congratulations on your fourth walk into SdC. I was reading your Blog and thought that looks like Sue, it was. I had a similar "bump into" Sue in July in SdC. Seems when you need a friendly smile there's Sue.

I hope you enjoyed your hospitalera stint, I did, in July at VF del Bierzo. Being a hospitalera can be such an emotional experience.

I will continue reading ....