Marion
Everyday we started off with the sound of an alarm clock to wak us up, and then it was a rush around to get ready to start our day of walking, so as we had a free day we did not need to get up early so we never set the alarm. It felt so strange to wake up without hearing the alarn and no need to rush out of bed to get ready. I found it difficult to lie in bed so got up anyway. Most of the day we spent looking at shops and I bought a few souvenirs to take home. The highlight of the day for me was going to the pilgrim service at the cathedral. The cathedral was packed with mostly pilgrims and quite a lot of tourists. The botefumeira was hanging down so Syl said that they must be going to swing it - that sent a tremble through me as when we were here in Santiago 2 years ago I was so looking forward to seeing the botefumeira being swung and they did not swing it. I found the whole service very emotional especially the nun singing and the atmosphere in the cathedral, it was electrifying. 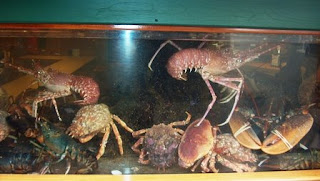 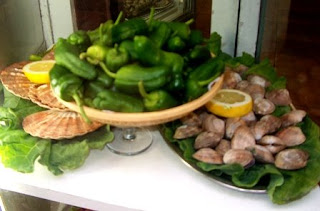 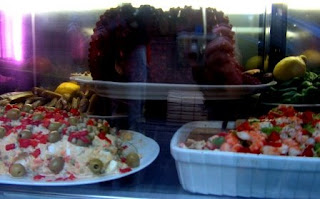 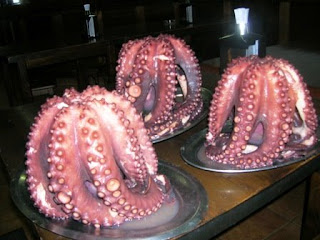 Sil
We went to bed quite early and watched Bafana-bafana play Brazil on television. Neither of us could stay awake but I got up to switch the TV off at 1.5 mins to go and saw that Brazil had scored. It was raining this morning and we kept ducking into the arcades to escape the drizzle.
We went to the morning market and Marion bought souvenirs and a t-shirt. How Val would have loved this market with its fish section, meat section, fresh fruits and vegetables. She would also have loved the restaurant windows in Santiago with their live lobsters, octopus and other regional food displays. Next time Val! 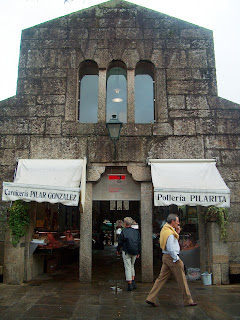 We went for coffee, chocolate and churros at a little coffee shop nearby. Then we went to the cathedral and found seats in the cross section. It was packed with pilgrims sitting on the floor on the sides. The nun sang, the priests trooped in and the mass began. The Botafumeiro was hanging from the vault but nobody was sure that it would be swung at mass so there was an air of expectation. I looked around me at the man faces there, mostly pilgrims. Some were dozing - many can´t understand the Spanish and the elderly priest mumbled like the Godfather so we couldn´t even make out the names of the countries that pilgrims had arrived from the day before. I thought of the medieval pilgrims and stories of running battles in the cathedral between pilgrims from different nations. On some occaisons the battles were so great that the cathedral had to be scrubbed clean of the bloodshed and re-consecrated before it could be used again. There were a few grumbles from people who blocked other´s views but no blood was shed! I thought about this cathedral being declared 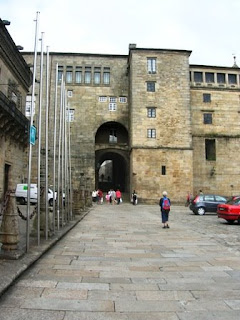 a Patrimony of Human kind. It belongs to all the people of the world and the people of Satiago are the custodians. A pilgrim told us that she had walked to Rome and was revolted by the the cold, hard, lavish grandeur of St Peter´s compared to the bustling, éveryman´atmosphere in Sant Iago´s cathedral. I know what she meant. People here arrived in shorts, boots, walking sticks, packs still on their backs and nobody was turned away. At St Peter´s they scruitinze the length of your skirt, whether or not your arms are covered, and woe betide anyone who doesn´t meet the criteria!
When communion started and the 8 priests in scarlet robes were summonsed, there was a stirring in the congregation, most eyes on the Botafumeiro - was this it? Were they going to see the Holy Smoke burner swinging across the nave? No. Not yet, first communion and then the maroon robed tiraboleiros arrived and the large silver thurible was lowered to a stirring of the congregation. Cameras starting clicking and people jostled for a better position to take videos. Soon it 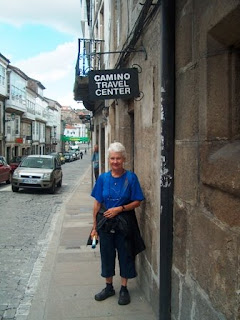 started to swing, first away from where we were sitting and then higher and higher above our heads with large gasps, oohs! and Aaaahs! with each swing. Then it was over and people clapped. In 2002 when I walked to Santiago we saw the Botafumeiro swinging in the cathedral. Later, at a meeting with Don Jaime (priest in charge of the pilgrim´s office and the mass) he asked if we had enjoyed the mass. Ýes,´we said, ánd we saw the Botafumeriro.´ He was not pleased. ¨No importante´he said. But I don´t agree. Every pilgrim who visits the cathedral wants to see the Botafumeiro and those that don´t are usually disappointed.
After mass we window shopped and then went to a special lunch at the ´Cafe Casino´- I had a vegetarian canneloni with crispy cheese topping - very tasty. We then walked down to where Marion will get her bus, looking for a shoemaker to cut and restitch my new waist bag that I bought yesterday. The Info centre told us that there was one in San Pedro - the road that pilgrims walk in from the Camino Frances - so off we went to the other side of town. The shop was closed until 4pm so we had an icecream and strolled up and down San Pedro greeting tired pilgrims as they trudged through the Porto Camino on their way to the cathedral. We took a trip on the little tourist train on a scenic tour around Santiago. Neither of us is hungry so we sit in the square, Marion with wine and me with a Kas orange drink, a packet of Dortios, olives and some cheese and watch the people in the square. On the way back to the hostal we meander through all the little alleys and we are offered morsels of Tarta de Santiago and Carprichos - little almond meringues. Marion tastes the regional goat's cheese and decides to buy one to take home. Tomorrow Marion leaves for home and I start off on the Fistera route. I´m not nervous to be walking on my own as I know that many pilgrims walk this route. So, until the next internet machine, this is Sil, over and out from Santiago. 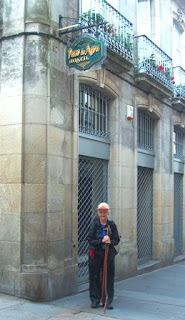 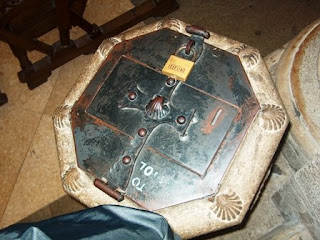 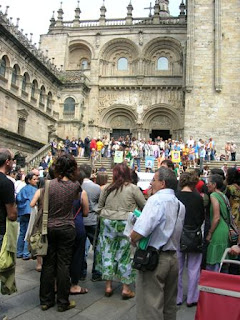 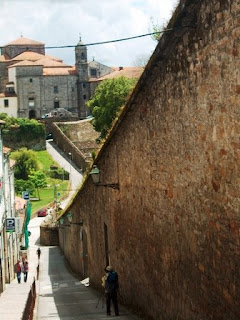 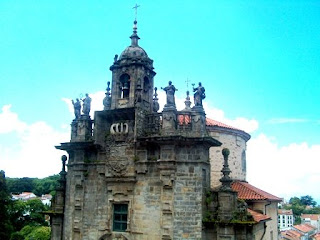 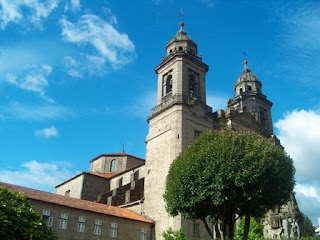 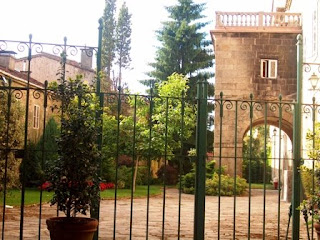 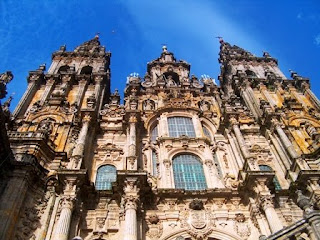 Marion Saturday.
I walked with Syl to the square, it was awful saying goodbye as I would have loved to have walked the extra few days, just a pity that I had booked my flight before we knew that Syl was going to walk to Finisterra instead of catching the bus. After leaving Syl I decided to go and have a coffee 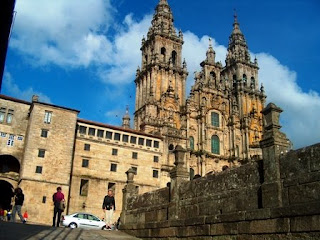 in one of the cafe bars before going back to the hotel to pack . When I arrived back at the hotel going up the stairs ahead of me I could see someone bending over with a backpack on with a South African flag. My mind was concertrating on what I was going to do for the rest of the day so at first did not register that it was Syl. It went through my mind "must be another South African in the hotel" all of a sudden the figure straightened up and I realised that it was Syl. I said " what on earth are you doing here", she told me that she had left her directions behind for the day and had come back for them and was busy writing me a note. So back to the square we went and another goodbye was said. Most of the day I wondered around the shops. I did go back to the cathedral to the pilgrim service at 12.00 and was ever so fortunate as again theyswung the botefumeira. I arrived at the airport early and they would not let me book in as the plane that was leaving from Madrid to South Africa had been overbooked by 10 people, they needed to wait to seeif I was going to be given a seat on that flight before they would book me from Santiago to 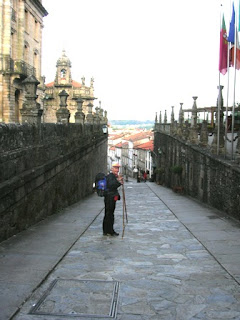 Madrid. I was rather upset as I had confirmed my flight a few times. So I went and sat in the resturant and had something to ear and drink. The lady from the Iberia counter came to look for me and said that it had been confirmed that I would be on the flight so could now book in but the flight was delayed. So when I reached Madrid I had to hot foot it to my connecting flight. Can you imagine my relief when I sat down on the plane. Unfortunately when I arrived in Johannesburg my luggage had gone missing from the plane to the conveyer belt!! Luckily they found it and delivered to that night to my daughters in Joburg where I stayed for a couple of days before coming home to Durban. I am really sad that my journey is now over, will have to start planning another. I often look for my sticks when getting up from a chair and miss the backpack on my back. Cannot wait for a get together with Val & Syl to go over our times together.
Posted by Sil at 8:12 AM

What I remember is the sound - the whoosh of the Botafumerio as it flew overhead.