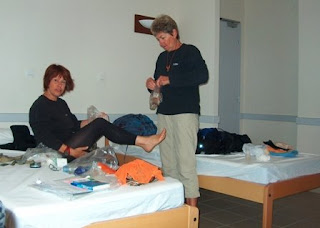 Marion
We woke up quite early to the sound of Val´s alarm clock. First thing I did was to look outside to see what the weather was like as last night it was raining. Unfortunately not so good, overcast again. We had hardly started walking when it started raining, which it did on and off most of the day, luckily we were well covered with our wonderful raincoats.
We first stopped at the Grotto and filled our water bottles with Holy water and looked inside The Church and then we were on our way.
After approximately 4 k we had not seen any 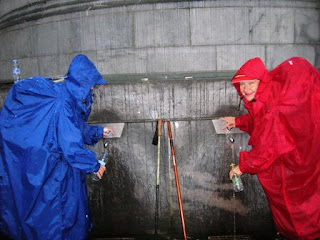 camino signs so were a bit worried that we were not on the correct road. We stopped someone and asked if we were on the right road and they said to carry on. Eventually we stopped a post lady and she said we were on the wrong roadso we had to go back. On the way back we stopped at a camping site and had coffee and asked the way. The lady said that as it was raining and the ground would be so wet and muddy we should rather take the road than go through the forest path. So off we started again. We did not mind the extra distance as it was all so senic. We walked 31k´s instead of 24.
When we reached our accomodation at Asson 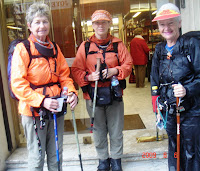 they said they were full but we could sleep on stretchers in the school diningroom. At first we were not so sure as the toilets and shower room was quite a distance away. Luckily they allowed us to sleep on stretchers in the foyer of the school entrance. It made a delightful room with our own toilet and a shower upstairs where the pilgrim accomodation was. We had our showers before the other pilgrims arrived - which were two delightful people from France, Marie and Sebastien. 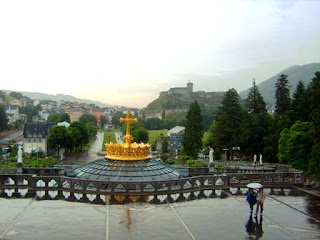 If you want to see the most beautiful scenery and charming twin villages in the South of France, walk left out of the Lourdes Sanctuary straight up a very steep hill for at least 4km until you come across the twin villages of Omex and Segus, two charming, almost Swiss looking villages. But alas, they are not on the Le Chemin St Jacques route! We had missed the first of the signs and instead of turning right at the Camping de la Foret onto the D31 we went straight up the flipping hill!
After asking the way we were directed back down the road to the camp site where we had coffee and hot chocolate before deciding on which path to take. After all the rain - and the fact that we 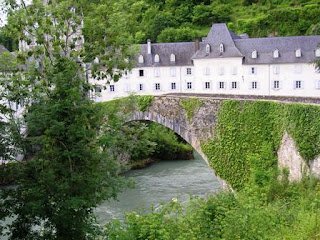 had already done 8kms and it was after 10am by now - we decided on the D937 so we crossed over the river, turned left and started walking. The road was fairly busy with very little space on the shoulder so we had to keep our wits about us especially when crossing the road as the traffic comes from the opposite side to traffic at home.
We stopped for morning tea on the side of the road and sat on a park bench on our sitting plastics having chocolate, water, biscuits and fruit. The rain started again and we put on our raincoats but it didn´t last long. Eventually we arrived at Asson. I had emailed the Accuiel St Jacques in March to reserve three beds but as 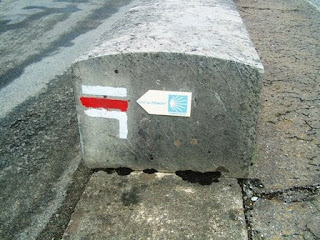 Marion has said, they did not get my email and had let two beds to another two pilgrims. We ended up in the foyer of the small school downstairs on canvas stretchers. I opted instead for a mattress on the floor. We were very comfortable there with two toilets and basins.
The two pilgrims who had been given the beds upstairs arrived, Marie Terese and Sebastien, both French, who had only met each other that day and had decided to walk together, Sebastien was dressed in very colourful clothing and had a red plastic nose on a string around his neck. Í am a clown in children´s hospitals ´hetold us, ´so I´ve 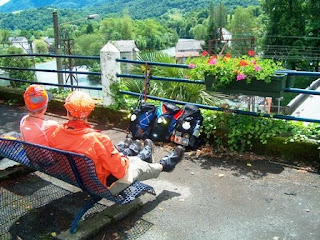 decided to do the camino my way.´ Good for him. He tunred out to be a charming young man (about 35 years old) and an excellent cook - which Val will talk more about.
As they were both walking on to Arudy and to Oloron I gave them the contact numbers for the two places we had booked to stay in and Marie phoned to book beds. They were walking on to St Jean Pied de Port where they would part ways, Marie to travel to Irun to walk the Camino Norte and Sebastian to continue on the Camino Frances to Roncesvalles and beyond. 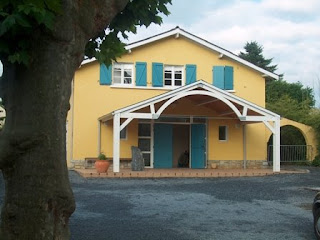 Val - Minister of Nutrition
When the lady told us there was no more room, she showed us a school dining room and I thought I would rather opt for a hotel. But unfortunately there were no hotels and as you have read we opted for the camp beds. We had supper with Marie and Sebastien and he offered to cook. We went to the supermarket bought food and wine (of course!) - we had Saint Jacques vin de table Francais...very appropriate. 2.37 euros...the cork screw cost 2.30 euros! We had pasta with tomatoes, garlic and onions, followed by ratatouille, then a local cows cheese and in the tradition 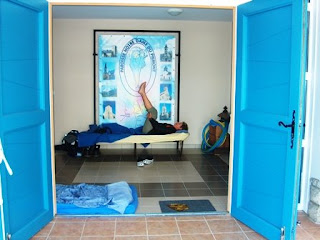 of the French, dessert - a vanilla and chocolate dessert served with Crepes Deutelles...a thin and lacy crepe invented in Quimper in 1888 - Traou Mad..means in the local language..."good things" and is a biscuit maker specialising in high quality Brittany cookies (Alan, my brother lives in Brittany...have you heard of these Alan?) Great served with ice cream, choc mousse etc. and even they say with a cup of champagne....!!!!
We bid goodnight and set off to our camp beds...these look like something from an army surplus store and to be honest are very stained and torn and feel damp. However, we are given a sheet to cover them and we have our silk sleeping bag inners. 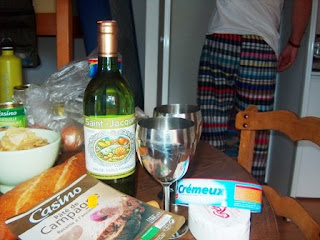 (not carrying sleeping bags as we are rather expecting it not to be cold and to have blankets available).
Not a good nights sleep - freezing cold - I cannot sleep and rumage through my items for my socks and footless tights - back into bed. No better, cannot stand it anymore, I put on my head lamp and frantically take out every item of clothing I can from my backpack -I wake the girls. I´m freezing - Syl who is on the floor but on a mattress which must help is hot so I pinch all the layers she has discarded - eventually when I cannot fit on another piece of clothing I get back into bed looking like a Telly Tubby - but I sleep at

last...for half an hour because the flipping alarm goes off. The next morning it looks as if we were robbed, everything from my backpack is all over the floor - now I have to repack everything! 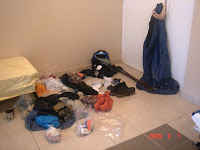 Hello!
I met Sebastien in Spain but later I didn't meet him any more! Do you have an e-mail adress? Mine is g-am@gmx.at
Please write me!
Thanks :)

My husband and I are planning to walk from Lourdes to Pamplona in September. This will be our fourth pilgrimage. We have the same atmospheric rain gear, but didn't use it last year in France and Spain.
We'd like to stay in touch. Phyllis.haislip@gmail.com

Interesting information, I think you're doing an important work, specially if we're talking about useful topics, I mean all is about good styles and you've got the same features in the blog. j2j3