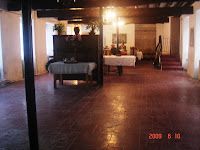 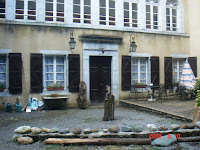 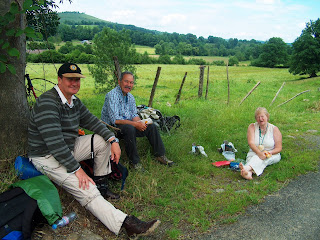 Val - Minister of Nutrition
A friend of Syl´s (although they had never met until this morning - they know each other from the Via Francigena association) arrived late last night with two other English people. They are not planning to walk as far as us today. We walk through bad mud today and SMS Anne and her fellow walkers to rather take the road. We keep meeting them along the way and they have changed their minds and are going to continue to Sarrance and stay at the same place as us.
We meet them on the road side and they say they are going to the next village to find a beer. Time to jump ship me thinks.....these are my kind 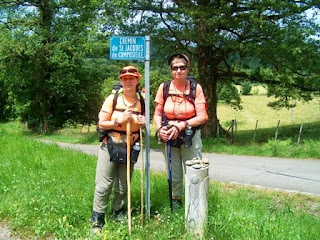 of walkers!
It´s day four and getting into the zone...that is to say that there is no multi-tasking...sit in a field and eat an apple...that´s it...just sit in the field and eat the apple, don´t read your email as you do so, don´t empty things out of the dishwasher with every bite, don´t try and multi task. It is what I like to call ¨living in the moment¨- and it feels great.
Today I am carrying a box of camembert..poor Marion is grumbling on about a smell...and we soon realise it is coming from the top of my backpack. What a relief she says, I thought it was me! Marion is carrying 4 tins of pate, we bought 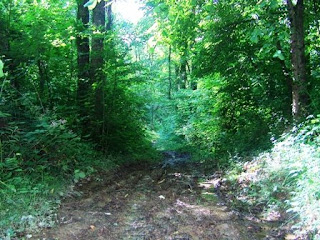 them in a pack, just enough for us to eat one each lunchtime. We also bought some wonderful walnut bread. We are sitting on a bench overlooking a beautiful valley, a man arrives in his car and off loads bottles for the French equivalent of a bottle bank. Syl goes over to speak to him....she speaks to him for ages, waving her hands about...poor man we think, he probably doesn´t have the faintest idea what she is saying, she doesn´t speak French but her Spanish is good. Then when she comes back, we say poor man Syl, you will be his dinner table story tonight. Oh, he speaks English, she says, he has been to Namibia and Kruger! 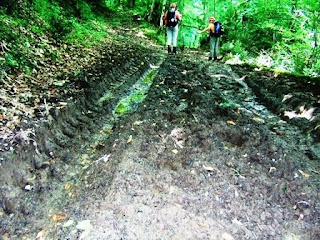 He tells us to visit the butcher in Sarrance it is the best in the Valley which we do. We buy proscuttio 8 slices for 1.80 euros. (sorry about the spelling, french key boards, spanish key boards and spell check doesn´t work and we have to type fast as others are waiting for a chance on the free internet!) On the way we pass a van which is converted into a travelling clothes shop...these people have no shops other than food. A lovely route but lots of stinging nettles and I keep stinging my hands...there are no dock leaves which we always used when we were kids to take the sting away, and I always thought they grew alongside stinging nettles but not here. 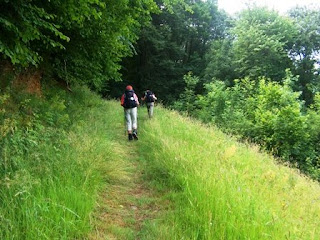 We arrive at our accommodation. Syl booked it on the internet...it was a monastory which has been converted to a hotel but has kept some simple accommodation for Pilgrims. It looked good on the internet and we are looking forward to it. We turn the corner and there in front of us is a very tired building with a scruffy entrance, rubbish everywhere. We go inside and I am sorry, but it is a dump. And so it will sound somewhat of a contradiction when I tell you that I had the best nights sleep I have had in a long time (and I sleep well at the best of times) and the best hospitality and evening. The English people arrived, Anne, Jerry and Jim. They didn´t get their beer and 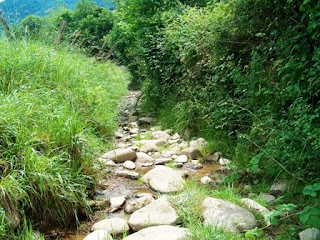 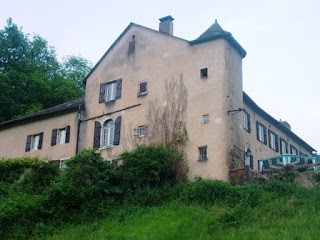 Now Richie has definitely used his IT skills when it comes to his website and touching up the picture on his business card. In fact, I think we should invite him to our next Wakefields conference and he can teach our agents how to write adverts and touch up (what are often) terrible photos. Syl and Marion will tell you more about the premises but I will add that these two people are doing a lot right. The beds were clean and warm with generous bedding. The coffee and breakfast was great and their hospitality superb. They showed us around and they were just completing two bedrooms for the upmarket part of the hotel...they were great with ensuites and 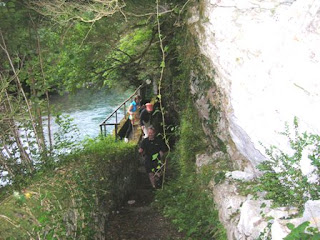 flat screen tv´s (which I thought unnecessary). They had bookings for these the following week...but the rest of the place looked like a bomb had hit it and it was scruffy and dirty. The dining room was huge but had two tables at one end and old furniture, and rubbish swept in the corners. They said everyone was always giving them advice and that is probably exactly what I wanted to do!
We wash our clothes and our boots are thick with mud. We find an old sink outside and Marion and I go to wash them. Marion cannot stand to watch me and takes over and washes my boots....that is surely a good friend who gladly washes your boots. After showering we met the 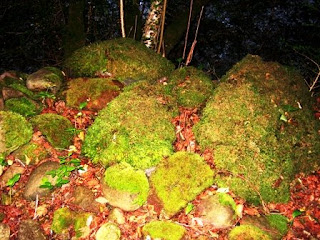 others at the outside table...I asked for White wine and it was served in a lovely wine glass and was nice and cold. Richie cooked us chicken with couscous and he did a pasta with mushrooms for Syl. He had his own porcini and morels which he had picked from his own woods...well we just hoped he knew his mushrooms! We survived and had a wonderful evening with these very special people. You could not help but just want these two to succeed.

Sil
Oloron Ste Marie: When we came down from our room there was Ann Milner, an Irish pilgrim who 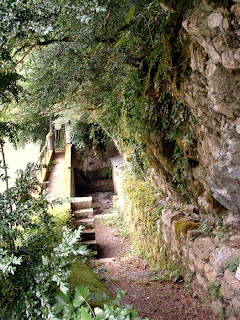 I have been conversing with via email for 3 years. When we got home from our walk to Rome in 2006, I found Ann was walking from Santiago to Rome and was somewhat lost in Italy due to no signs or waymarks. I started sending her our Cryptic Clues, a few pages at a time, and information on accommodation. We then kept in touch after the formation of the CPR (Confraternity of Pilgrims to Rome). By sheer chance, just a week ago, we discovered that we would be staying atthe same place in Oloron on the same day! She was walking with Jim and Gerry as far as Somport and was not intending to walk as far as Sarrance but when I told them about the converted monastery accommodation we´d booked in for the night they called in at the tourist office who phoned ahead and booked them in too. They were staying on for breakfast in Oloron so we left a couple of hours before them.
The first couple of kms on the road it was dry but as soon as we turned into the forest we started the ´Slippy-slippy-shake´on mud as thick as custard. When we finally came out 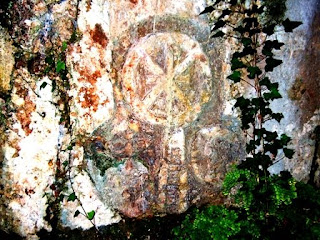 onto the road we dithered about a bit trying to decide whether to continue on the path or stick to the road. ¨The rest of the way can´t be as wet as the first part´we said, but it was! Val sent an SMS to Ann warning them about the mud and they thanked us later for the warning as none of them was ready for a slippery sludge walk to Sarrance.
Les Fonatines deÉscot is about 1.5km before Sarrance and one has to take the road route to reach it. It is down a private road and when we turned a corner and saw it for the first time I was amazed to see an almost derelict chatteau amongst the trees. I was even more surprised to discover that there is only one couple running the whole 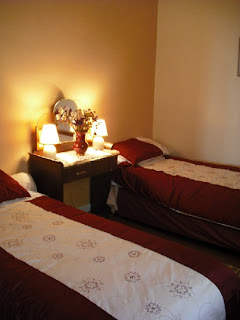 place. On the website it looked like a huge complex, with smart hotel, grand salon, St Jacques suite, many indoor reception rooms and acitivities and a few ´simple´rooms for pilgrims who had use of the grounds. Well, it is a run-down but gracious old building that once housed the St James Study Centre, was a monastery of the Knights of Santiago and still contains a few books and statues from the past.
Corrine (the English owner) took us on a walk to the river where the remains of the thermal baths, healing spring (the Fontaines) and hot houses used to be. It was amazing to see the old stone baths in rooms below the viewing walkway. The grotoo has fertility parietal art and other symbols in the stones. The water that continually springs out into a stone basin is warm and has been tested as ´potable´. We all filled our bottles before continuing down to the pebble beach where we could see trout jumping and flopping in the pools below the rocks.
While having drinks on the terrace Ricky pointed out a Royal Eagle´s nest on the rocks high above the river. There are four pairs of these rare birds in the area which is a nature park. We had a wonderful dinner, cooked by Richie.
We had a good sleep - Annie and I sharing the Buddelia simple room with a secret toilet that we were asked not to use at night as it is electric and every noisy!
Posted by Sil at 11:27 AM