Val
I log off and close down my computer, proud and satisfied of my empty in box. I unplug it and zip it into its case. But I know just like Houdini, it will escape and upon my return its in box will be full again.
I climb into Charli (my car) and head for the panel beaters where she is going on her annual holidays - sometimes she has two or three holidys a year. Charli has been unlucky, many bumps and scratches and has been stolen, but thankfully recovered with little damage other than having some one invade her person and drive her away. The insurance assessor and I are on first name terms, last year he said "Happy Christmas Val, I hope we dont meet again next year" - "Oh he said, I mean that in the nicest way". But I had a hunch we would and indeed we met several times the following year.
Martin met me at the Panel Beaters he was dropping me off at Syl´s where Finn was to take us the Airport. Halfway to Syl´s, Martin said "where´s your backpack?" "In the boot" I said....."of my car!!!!" Calmy we glide off the next exit - he says phone the garage to have your gear ready for us at the entrance...he says this without any frustration, just kindness and I recognise a hint of resignation, it wasn´t unexpected.
Every trip the blog includes a list of items I have lost, this years would have been easy, just everything including passport, plane tickets and credit cards. I phone Syl "Sorry Syl, as soon as we get to JHB I´ll have a glass of wine and relax into the zone.....we arrive at Syl´s.......... 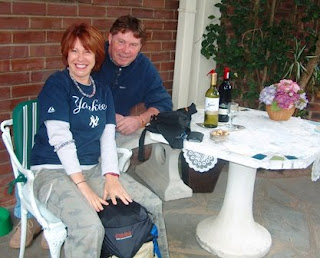 Val phoned to say that they had dropped her car off at the garage for a service. On the way to Westville, Martin asked, "where is your backpack?"
"In the car" said Val. "OMG - its in the other car!"
So, they had to turn back to Hillcrest to collect her Charli (her Chellini waist bag) and her backpack.
"You´ll have to get me a glass of wine when we reach the airport" she sighs, "I´m not in the Zone at all!"
Finn carried a patio armchair to the front garden table, I covered it with a lace cloth and we put out two bottles of wine and a little dish of nuts. When they arrived, we said, "Come down here just for a moment. When they saw the wine they just laughed! Martin said goodbye and Val stayed for a glass of chilled white wine.
I made sure she had another at the airport before we flew on 1 Time which arrived on time in 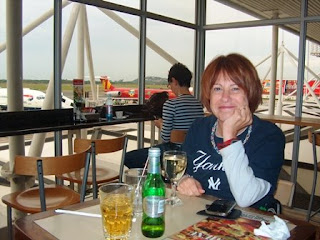 Johannesburg. Marion was there to meet us and we had a light supper at the airport before our flight. So, from JHB to Madrid and Madrid to Toulouse, then a bus and a 2 hour train ride to Lourdes.
It was pouring with rain when we got off the train in Lourdes. I remembered that there was a Post Office half way down the hill to the Centre Ville and I posted my parcel to Santiago with no problem. As we walked down the steep hill to the main centre we looked like pregnant hunchbacks in our ALTUS raincoats but at least were were dry!
We had to ask at the Information for directions to 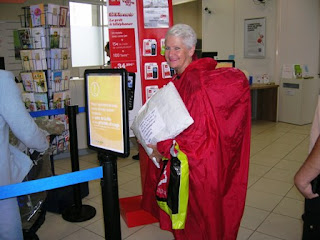 our hotel and were soon settled in at the Hotel St Etienne. There are more hotels per population in Lourdes than in any other town in Europe.
The hotel was 250mt from the Sanctuary to we had a chance to visit the grotto and have a look at the Sanctuary complex - and get our first European stamp - at the pilgrim´s info centre.
The main street to Lourdes is a Bernadette and Mary Disney World with souvenir shops cheek by jowl all up and down the streets. You can buy anything with pictures of Mary and Bernadette from dish cloths to ashtrays, key rings to bottle openers.
While the two girls settled in I found an open 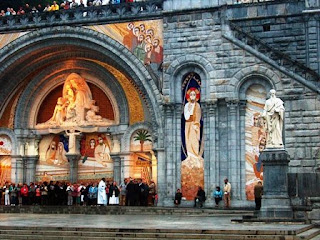 internet cafe and was able to send an email home. We bought ´torches´- a candle in a little paper lampshade with Catholic Verses on the sides in English. We then gathered outside the Basillica at 9pm with hundreds of others who were waiting to take part in the procession. It is very peaceful and very moving but I also felt as though I was a part of a superstitious rite - candles lit, walking in slow procession chanting verses for Mary and Bernadette. It started to rain really hard - there was even some thunder - so we slipped out of the procession and walked back to the hotel. It had been a long day. We had left home at 11h30 and it was now almost 10pm the next day. 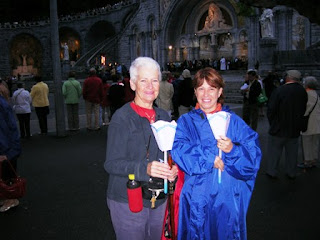 At the hotel we got our walking clothes ready for the next day, Arnica, Vaseline and strapping all ready for the start of our 2009 Pilgrimage!!
Posted by Sil at 9:02 AM