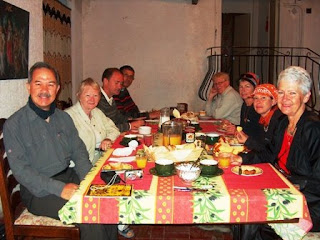 The River in front of the Fontaine Complex 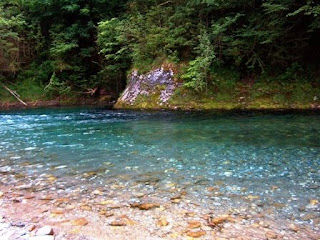 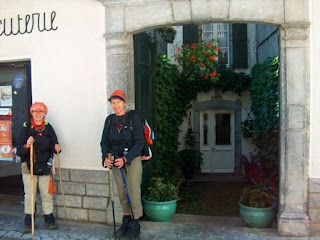 Narrow paths on the edge of the river 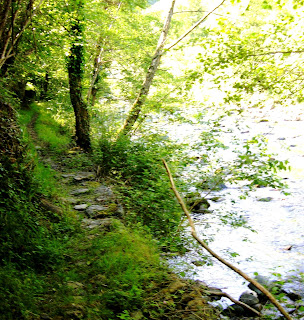 Narrow, muddy paths through the forest 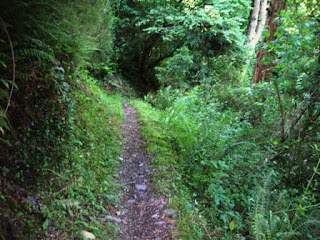 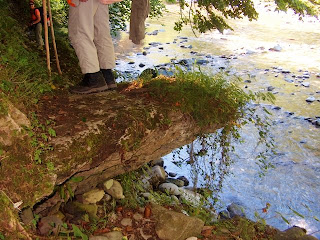 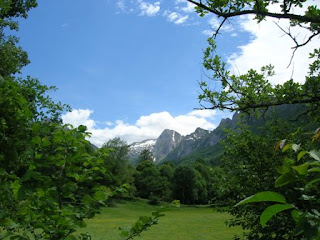 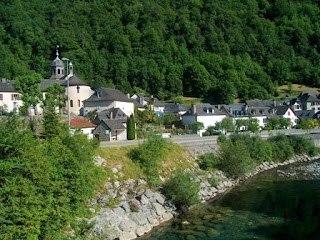 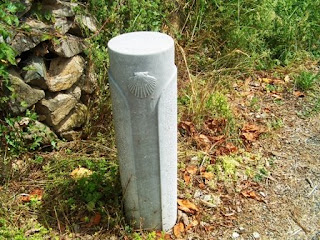 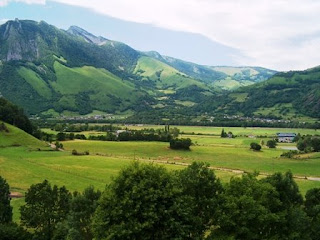 Marion
It was such an interesting stay at our accomodation last evening with Ann, Jim and Jerry. We all had a tour of the property and a delicious meal. Val and myself shared a room and Syl shared a room with Ann. After breakfast in the morning we set off and our 1st stop was in the centre of Sarrance.
We walked alongside the valley of IÁrrec d´Isson high above the Gave dÁspe which flows in a deep gorge. The path was very rocky and lots of mud, almost clay earth which sucked onto our boots. Most of the day was on the mountain side - it was tremendous. 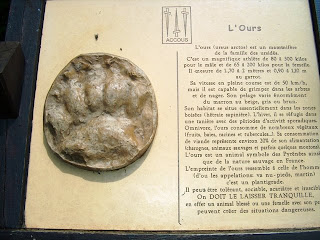 We had a mountain on our left our path then the river, then the road and then another mountain on the right. Lots of green trees and sometimes a garden of flowers. Sometimes the river was right next to us and sometimes deep down below. At times the path was very rocky, we crossed over a bridge a couple ot times to the other side. We also saw a lot of Royal eagles, such beautiful birds.
Although our path went up and down we were actually climbing the whole day. At times you could see the mountains on the other side with snow on top of them.
It was such a tremendous day.

Sil
When you walk along riverine paths through a forest there are long periods when there is no light, no view and nothing to do but look at your feet. Marion loves the forest paths but I prefer them to be a bit wider than they were today! At times they seemed postively dangerous, no wider that 12cm, sloping to the long drop down to the river far below. We covered the first 5km in 2hours, up one slippery slope and then down equally slippery slopes, sometimes almost next to the raging river but at other times high above. We finally came out of the river onto a small road and climbed up to Borce, a charming, spotlessly clean village with a St James refuge (that was full when we stopped) and finally to the Communal Gite in the centre of the village. We had an 8 bed room to ourselves, managed to do most of our washing and buy soup and vegetables, bread and wine for dinner which we ate in the Gite diningroom. Until now we've been spoiled with Sebastien cooking for us in Asson, Pierre and Sebastien cooking for us in Arudy, a restaurant meal in Oloron and Richie's lovely dinner last night in Sarrance. Tomorrow night we'll be sleeping in Spain! 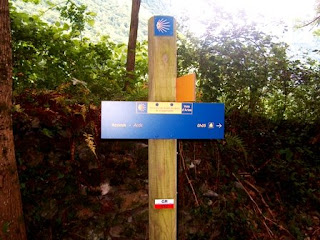 Val - Minister of Nutrition
After a good nights sleep, we all met in the ´the dining room´for breakfast. Corrine had laid the table with lovely bright tablecloths and crockery and there was fresh coffee brewed. We had a breakfast of bread and brioche with jams. Too much bread now!
Today I felt tired, strange given the lovely sleep. We had a lovely walk through forests and there were buildings like crofts all over, Marion and I went into one and got dive bombed by bats..horrid!We had lunch in a field...checked to see if there were any bulls as I did not carry my mace spray this time...chance to layout our wet 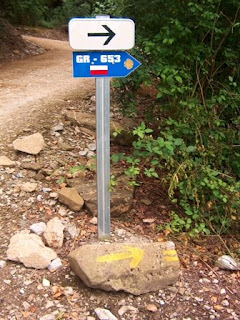 clothes and dry them...finally some blue sky showing through for the first day.
"Syl said we had to get going"
"We said, No! No! No!
During the walk today I felt really guilty-I dream of the Pilgrim Refugio being full and we have to stay in a hotel - 4 star at least! We arrive and the "Inn is indeed full" Yipee! Despite exhaustion I could dance in a manner that would make Flattery and his dance troupe envious. Syl asks if there is a hotel (a Chambre). Non, Non just a community gite in the village....now I think..please let there be a room, I just want to be able to lie horizontally. So we walk a little further and there is the Gite with its own supermarket and what is this a BAR! With tables outside on a terrace.The Gite is a brand new dormitory style accommodation with lovely kitchen and huge pine table. The village itself is spotless and looks new, we realise it is indeed an original Medival Village which the community has restored...each building has a before and 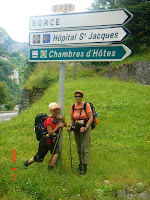 after picture on it. I sit outside, order a cold glass of wine and phone Martin.
I go back inside and ask for another wine...another she says! They are very small glasses, average cost of a glass of wine has been 1.60 euros.
We shop in the supermarket and buy soup and bread and I ask for another wine to take with me...this is your last she says!
Everywhere the name Borce is accompanied by a picture of a Bear and we ask if Borce means Bear but it doesn´t. They have 8 bears in the National Park.
Tomorrow it is apparently straight up and over the Pyrenees so we buy lots of food and treats to keep us going including chocolate - and especially an orange for old time sake...In Italy we had a 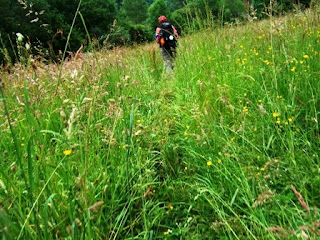 day where we could not cross the river because the bridge had been destroyed...we tried to do a detour but couldn´t and over an hour and half later had to go back and cross the river....we were exhausted in 40 degree heat and had already covered 45 km...Kathy had the only piece of food remaining, an orange...we each had a segment...to this day I have never eaten a sweeter tasting orange.
Well tomorrow is Spain and I really hope it is a lot brighter in everyway than this part of France. Thankfully the beautiful Pyrenees is not overshadowed by its grey inhabitants. The people are quite scruffy and on the whole the villages have been dirty.Even young people look as if they 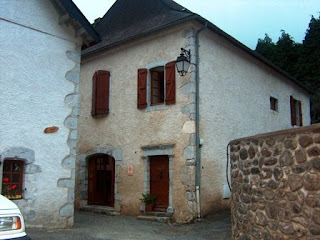 have never had a decent haircut and their clothes are just whatever they grabbed that morning. Sorry but that is my opinion...cannot really comment on the food as we only had the opportunity to eat out once.
Posted by Sil at 11:40 AM

Am really enjoying reading all your accounts. I am laughing out loudly at some of the variants in the accounts as well eg the cow pat story!

Oh Val. I remember the orange story! ... and they were normally rather nice red oranges too. Remember we got onto them as they were just about the only fruit that traveled well in a back pack. I remember a rather squishy nectarine Rayna and I shared somewhere - rather worse for wear after a trip in her tin mug (put there to protect it!) from the point of purchase to where it was eventually eaten. Soory meals are proving difficult to write about! Kathy